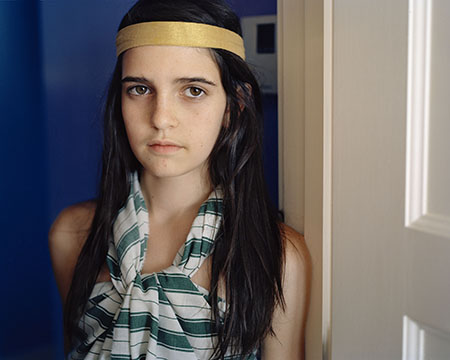 Teens are at the forefront of American political life this year, calling for policy changes in the aftermath of school shootings and embracing the opportunity to vote once they reach 18. Today’s 13 year olds will be 40 when the country shifts to having a minority majority. So, it’s essential to explore the ways these youths are experiencing and thinking about themselves, their communities, and the world. That’s just what Betsy Schneider accomplished in photographing 250 teens from around the nation in 2012, and asking each to share a personal statement. For this exhibition, Schneider is showing 20 large-scale photographs of individual teens. Every text panel has the subject’s first name, and many also feature thoughts the subject shared with Schneider.

The exhibition also includes an archive of smaller prints. There’s one for every youth she spoke with, accompanied by the subject’s first name and hometown. Collectively, they remind us that new generations rise, bringing with them new dreams, anxieties, and possibilities. Schneider’s lens poignantly captures the cusp between childhood and adulthood, revealing the mysterious mix of wonder and wisdom that marks adolescence. Her images reveal the diversity of America’s youth, while emphasizing their shared humanity.

For young viewers, the exhibition affirms that their ideas are important, and their existence matters. That’s especially true of the video component, titled “Triskaidekaphobia, The Film.” It’s a 51-minute video featuring more than two dozen teens talking about their own challenges, aspirations, and life experiences. Hearing these first-person accounts punctuates the perils and joys of being 13, when emotions are heightened and physical change is accelerated. For those who fear the next generation won’t appreciate the power of art to shape identity and community, this show presents a counterpoint. It’s relevant and engaging for the youth who see it, which makes them all the more likely to return to museums again and again as a source of meaning and connection.