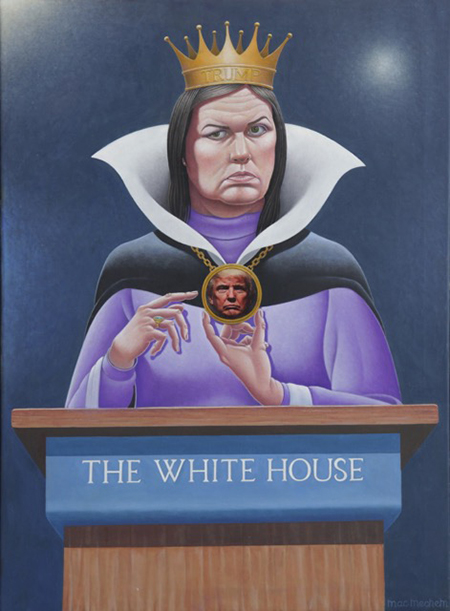 America’s present sinister, clownish reign is the culmination of decades of activity by what Hillary Clinton once called “the vast right-wing conspiracy” (for which she was mocked by those conspirators). I am reminded of Hamlet scolding his mother for succumbing to his lecherous, murderous uncle, cruelly contrasting portraits of the noble and ignoble brothers:

This was your husband. Look you now, what follows.
Here is your husband, like a mildewed ear
Blasting his wholesome brother. Have you eyes?

Most of us do, even if the blind remain blusterous. And so now is assembled “Trump Card,” an exemplary demonstration of First Amendment freedom of expression that brings together Enrique Chagoya, Travis Somerville and emerging artists Patrick Martinez and Mac Mechem. Their ensemble of fifteen works mock and indict Trumpism and the cultural forces that it represents: racism, genocide and what the philosopher William James deemed our “national disease,” a “moral flabbiness” born of “the worship of the bitch-goddess Success.” (in a letter to H.G. Wells, 1906)

Chagoya’s culture mash-up aesthetic, appropriating images from history, art history and anthropology to comment on current culture informs the four mixed-media prints shown here, courtesy of Magnolia Editions: two traditional copper-plate etchings, and two archival digital prints on handmade paper, one employing the Amate paper favored by the Aztecs. “The President’s Xenophobic Nightmare in a Foreign Language” riffs on a 1557 Theodore de Bry etching depicting the adventures of Hans Staden among the cannibal Tupinambas of Brazil. In Chagoya’s subversive redo, the severed head of the Portuguese victim at the very center of the circle of flesh-feasting women has been replaced by the yellow-haired, Know-Nothing Trump’s. Small vignette portraits of Columbus and a mustachioed, Mountie-hatted Robert Baden-Powell, the founder of the Boy Scouts, occupy the lower corners. An inscription in Spanish atop the image reads, “Las mujeres se quedan con las tripas,” or, “The women are left with the guts,” which is then followed by the Trumpian phrase “Nasty Women.” “Atlas and the Arugulas” depicts a procession based on a 17th-century print by Jacques Callot. Green-costumed allegorical figures (Arugula being a salad green) stride alongside a float crowned by Atlas/President Obama, supporting the globe on his shoulders, on top of which sits Hillary Clinton. They are accompanied by George W. Bush, Condilezza Rice. “Untitled (After Edward Curtis)” adds to that Western documentarian’s photograph of an Indian warrior, resplendently mounted and battle-ready, two anomalous elements: a billboard bearing an iPad and the puddle-jumping, silhouetted figure caught midair in Cartier-Bresson’s iconic 1932 photo “Behind the Gare St. Lazare” (1932) — one of Cartier-Bresson’s decisive moments indeed.

While Chagoya upends art and history, Martinez parodies the moral blindness of standardized education. His two paintings, “Flower Memorial Pee Chee” and “The New 2016 Pee Chee,” of identical size, format and peach color, could almost be considered a diptych. Taking as a point of departure the Pee Chee card-stock folders familiar to American high-schoolers from the 1960s until recently, Martinez replaces their generic sporty illustrations with realistic depictions of the victims of gross police injustices: Tamir Rice and Justine Damond, casually shot in Ohio and Minnesota, respectively; the Latina Juanita Mendez-Medrano, thrown to the ground for a petty license infraction in California; and the mixed-race, star quarterback Colin Kaepernick, blackballed by the NFL for publicly protesting police vigilantism.

Mechem’s five meticulously painted oils are the most self-explanatory works in the show, presenting familiar public figures in mocking theatrical tableaux: Sarah Huckabee Sanders as Snow White’s wicked stepmother in “Who’s the Fairest of US All”’ — with Trump, naturally, reflected in the locket mirror; a MAGA-capped Trump and a GOP elephant sexually assaulting a mother and child on a golf course in “Healthcare Sandwich”; and a pajamaed Trump, in “Plumbing the Depths of Inspiration,” plunging his toilet and tweeting at 5:00am — call it multitasking.

If many Americans persist in choosing a Gertrude-like moral blindness, it will not be for lack of critical voices from certain sectors of the art world. Other sectors, more highly touted, with bigger budgets, may mount retrospectives like this in the future, once the danger is history.