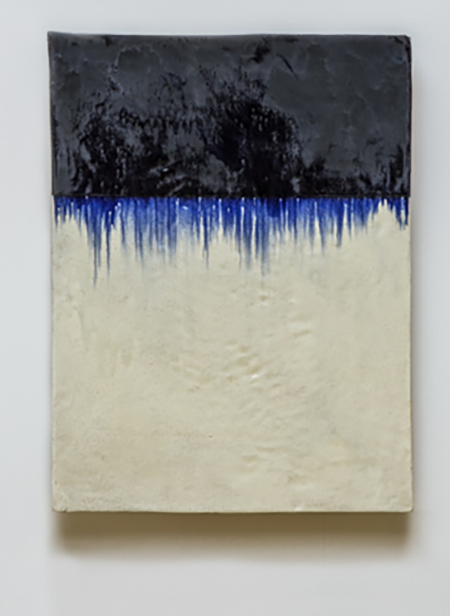 Omaha-based Jun Kaneko, second-wave pioneer of the contemporary clay movement in Los Angeles during the 1960s, is the subject of this carefully selected survey. Born in Nagoya, Japan, the 76-year-old grew up during World War II and arrived in L.A. at age 21, where he was shepherded by a wealthy collector couple, Mr. and Mrs. Fred Marer, and mentored by the Chouinard circle surrounding Peter Voulkos, Paul Soldner and others. Miraculously, his work never resembled theirs.

The remarkable results of this foreign exchange student’s success in America are directly related to how he not only mastered ceramics as practice here, but continued on for 50 years to transmit his evolving artistic ideas into works on paper, acrylics on handmade paper and canvas, public art and, crucially, glass sculptures and installations. The 30 distinctive works presented here underline Kaneko’s extraordinary range of material diversity and grasp of mark-making that developed over five decades: stripes, polka-dots, grids, drips, triangles and diagonal lines. It’s an image vocabulary which covers forms such as ovals, spheres, sheets, and “dangos” (a Japanese term for dumpling).

While the public-scale pieces are not on view, they were seen in New York on Park Avenue to great acclaim in 2008 and at Millennium Park in Chicago in 2013. The mix here is of small tabletop, medium pedestal-sized and tall free-standing sculptures, which demonstrate a muted, restrained side that is quietly impressive.

Also included are many near-monochrome works on paper, along with other sparse pictures and plain objects that play up the understated, nostalgically Japanese quality of Kaneko’s sensibility. These are in sharp contrast to his more widely known sculptures with brighter colors. Thus, three untitled “Maine Drawings” (2002) and two “Hawaiian Drawings” (2003) set smoky sumi ink and oil paint-stick marks onto linear grids over handmade Korean paper. Averaging five feet high, they have a welcome, somber presence possibly overlooked in Kaneko’s work in general.

Some of the smaller untitled wall plaques made of the smokepit-fired stoneware known as “raku” have the same gray ground but emit more light, while others set notched corner color blocks over black-and-white fences. The vertical, glazed ceramic “Wall Slabs” are the most minimal of all: a central square or upper-half block elegantly leaks its dark-blue cobalt glaze drips above a lower white ground. Blue-and-white china is another nod to heritage. Other allusions to historical Japanese ceramics come to mind in the “Raku Dangos,” wherein three-dimensional forms up to four feet high are drenched in glazes that descend from deep blue and paler shades of white to pooling drips at their bases, dark blue as the ocean.

Kaneko is so prolific that he has transcended any limitations he set for himself years ago. Take his palette — restricted tightly to primaries and a few complementaries, like Calder or Vasarely — he continues to make each piece an individual artwork rather than a moment in an ongoing series.

The shift to glass in 2001 in the Czech Republic was deeply significant for him and for the field of glass art. It led to yet more revelations of space, light, ethereal color and eventually huge indoor and outdoor permanent public pieces echoing and calling out the greatest of Czech glass artists, Stanislav Libensky and Vera Brychtova. “Chunk” and “Untitled Bullseye Glass” (both 2005) are cast, rather than blown, severely geometric rather than curvy or sensuous. In both cases, one looks through the glass, perceiving color as fluid and kinetic, sleek and cloudy. The notched rectangular solids bring a new approach to glass sculpture for those more accustomed to bravura mouth-blowing or over-the-top, off-beat colors. As with his ceramics, Kaneko’s glass affirms that it is the artist’s creative vision — nonverbal, optical and material — that drives and sustains their art, building to an impressive lifetime achievement, seen here in a generous fragment.