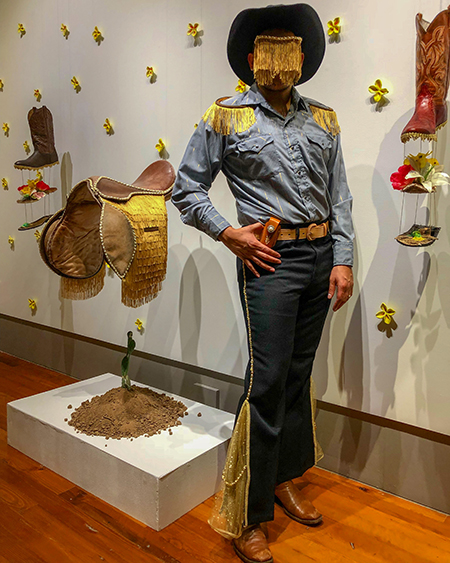 Jose Villalobos wearing his performance attire in his installation "We have always been," 2018, at the San Antonio Department of Culture and Creative Development's Culture Commons Gallery

To celebrate Pride Month, which occurs every June to commemorate the Stonewall Riots, I would like to spotlight the work of two young artists who have recently exhibited compelling installations that reflect their experiences growing up as gay males, but which, more importantly, raise questions about conventional interpretations of masculinity. In Los Angeles-based Nathan Vincent's exhibition at Noysky Projects, the vehicle for creative gender-bending was the soldier. San Antonio artist Jose Villalobos' new work challenges usual conceptions of another male trope: what it means to be a cowboy. In different ways, both artists use processes and visuals stereotypically associated with women to question notions of machismo while, in making and exhibiting their work, they also expunge personal demons that commonly haunt gay men during childhood.

The son of a pastor, Vincent grew up in the Midwest and early on was enamored with his mother's hand-crocheted afghans. Although she initially discouraged her son's enthusiasm for wanting to learn crochet, his mother eventually gave in and taught him what she (like most people) considered to be a girl's endeavor. As time went on, Vincent mastered a variety of processes employing yarn which, in addition to crochet, includes cross stitching, latch hook, macramé and knitting. While studying art in college, he found validation for using craft techniques as a contemporary artist in the embroidered paintings of Ghada Amer. So Vincent embroidered some paintings and then, for sculptural projects, turned to knitting and crochet.

By 2011, Vincent was crocheting objects and entire installations that address his personal questioning of what it means to be a man. These include the series "Boy Toys," crocheted sculptures of stereotypically male objects such as a joystick and other video game controls, and "Locker Room," an installation of crocheted showers, lockers, a bench and urinals that were featured in the 2014 exhibition "Queer Threads" at the Leslie-Lohman Museum of Gay and Lesbian Art in New York.

Originally created and installed at the Bellevue Art Museum, Vincent's "Let's Play War" is a sculptural environment based on tiny plastic toy soldier sets. Constructed by crocheting over foam armatures, Vincent's weapon-carrying soldiers come in two shades used for military khaki: ochre and green. Posed in combat positions and almost life size in scale, the soldiers were clustered together in Noysky Project's small darkened space like two teams-in-training practicing war games before going into combat. Strangely uncanny in the same manner as Méret Oppenheim's Surrealist fur-covered teacup, Vincent's soldiers made of yarn possess just enough shock value to stir up some healthy questioning, not only relating to masculinity and gender expectations, but also about violence and war. All of these topics have become increasingly relevant in the current political era.

Like Vincent, Villalobos was raised in a strongly religious household. In his case, early life revolved around a Christian/Pentecostal faith that prohibited such things as secular music and television, and denied women the right to wear pants. Add to this a borderland machismo culture and you begin to get a picture of the fears Villalobos faced before coming out as gay. In 2016, he addressed the issue of bullying in an installation of leather belts which he hand-stamped with Spanish language homophobic slurs. For his next project, he embellished white sombreros with tiers of gold fringe and suspended them from a ceiling. Correspondingly, he attended the opening wearing a white cowboy ensemble that included a fringed sombrero that hid his face  referring to years spent concealing his orientation  as well as a Western shirt to which he added sequins and fringe, white Levis, cowboy boots with sequined heels, and a leather belt imprinted with the word "delicado." He embroidered the words "macho" and "maricon" ("faggot") on the shirt, with the latter phrase hidden under fringe, another reference to having been closeted.

For his new installation in a group Pride exhibition at San Antonio's Department of Culture and Creative Development's Culture Commons Gallery, Villalobos suspended a leather saddle layered in gold fringe, accented with pearls, and flanked by deconstructed cowboy boots. Other components include floral images as symbols for freedom to be oneself, and a sculpture of a dead hummingbird, a reference to self-denial of such freedom if one stays closeted.

At the opening, Villalobos presented his performance "(FAG)," wearing a black cowboy hat, glasses with gold fringe covering his face, boots, and black polyester ranger pants with gold chains and pearls added to the sides and the lower section converted into bell bottoms with gold tulle inserts. After being introduced by a Mariachi band that also closed the performance, Villalobos removed his belt and stamped "MACHO" into it. As he produced each letter, he recited a phrase about hatred towards gays, with the first word of each phrase beginning with the letter he was inscribing. He then inked the embossing tools and stamped "FAG" on his forehead while reciting the phrase, "Fag. I wear it proud on my skin. Or do I?"