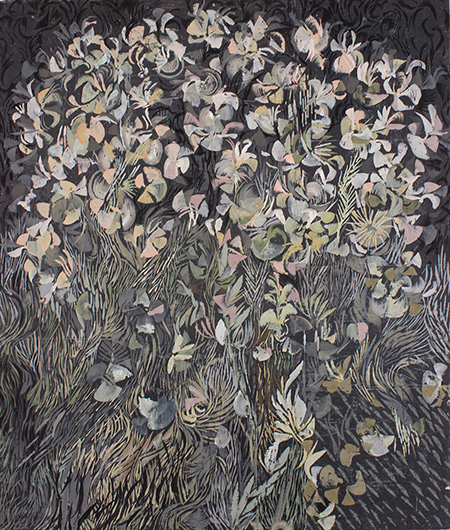 It’s interesting to speculate whether Tim Cross’ early training in ceramics at Evergreen State College (BA, 1995) has anything to do with the ease with which he covers entire extended surfaces using a light touch and loosely uniform patterns. In the case of his new work, see-through leaves on a dark background are, not that different from pottery decoration or 18th-century French wallpaper patterns. After Evergreen, Cross went on to the School of the Art Institute of Chicago, finishing a three-year postgraduate program in 2003. He recently taught at Edmonds Community College, ran the entire art exhibition program at Sea-Tac Airport for a decade, and now paints full time.

The international influences, especially the interface of imperial China and Europe, haunt Cross’ new work: faintly colored landscapes in tightly focused palettes of greens or blues or brown or blacks and greys, rarely blended or overlapping, but pushing conceptual boundaries about how far color decisions can be stretched in one direction or another without crossing over into a solely decorative effect. In Cross’ case, there is a strong undertow of perceptual instability that makes these among the most compelling paintings recently seen in Seattle. It is impossible to fully take in each composition, the eye wandering uncontrollably over the paper, silk or canvas surface markings.

Playing off the “evergreen,” that is, Douglas fir-inspired imagery of the Northwest School à la Morris Graves and Mark Tobey, Cross is cross-pollinating aspects of Chinese and Japanese scroll painting — the tall, continuous landscape panel, for example — but rendering them somehow more dryly. His greater emphasis on line and drawing also recalls Asian art practice that softens the contrast between brush and pen, rather than “mystic” stabs by the so-called “École du Pacifique” (as the Northwest School was dubbed in Paris in the 1960s).

Post-modern to the degree that even raising the look of art from former European colonies is noticeable or suspect, Cross faces such challenges head-on. By painting on silk, as in “Black” and “Grey Garden Thickets” and “Black Thicket,” even the core material and trade secret the Chinese sold to the West — the cultivation and weaving of silk — becomes  the literal basis of the tall panels. The bouquets and bushes on each are the most agitated of all, looking like reverse-negative Zen paintings, blurry and disorienting, but descriptive of a cloudy forested environment, hushed by day or shocked with moonlight.

At the other extreme, sun-filled scenes of backyard gardens from Seattle to the San Juan Islands are condensed into close-value, curvy and straight-lined compositions with real plants, shrubs, trees and pathways identifiable. Lines radiate toward each center, inviting the viewer into Cross’ secret garden. There’s another analogy, to china painting in “Blue Forest,” a small gouache on paper: “Blue Willow” china crisscross influences, present ever since its Chinese origins and apogee in American Sunday dinnerware. Within such narrow material limits, one would think the paintings become familiar or weary. Not at all. Each landscape or, better put, landscape detail or fragment, has its own elements and viewpoint whether aerial, sidewise or frontal.

Some, like “Violet Trees,” “Green Garden” and “Neon Woods Duwamish,” are smaller inks-and-gouaches with wider palettes. Among the larger works, “Night Tree Falls,” “Backyard Thicket” and “Black Forest” are moody and demonstrative, with their churning skies or windswept flowerbeds. I can only imagine how the surface of the pale “Backyard Thicket” might change in a room with more natural daylight. As seen in his earlier exhibitions, Cross can control any range of colors he wishes to. Here he willfully restricts them to great effect, one per painting.

Other artists of his generation such as Jared Rue also attempt a new take on Northwest landscape or “mystic” sensibilities. Cross avoids spirituality, sentimentality or exaltation by concentrating on optical properties of depth perception, color spectrum distinctions, and the unreliability of vision in general. Exploiting our weakness for straining to see depth in a landscape and cleverly inhibiting our ability to do so by tightening variations of hue and shade, Cross has accomplished something noteworthy: he has bridged several historical moments in painting and the decorative arts by stripping down such elements or components into accretive, gradual visual phenomena. Who knew blurry landscape painting could become a form of Neo-Op art?