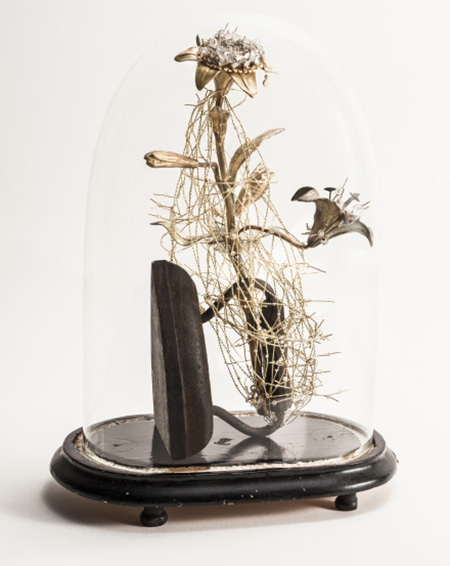 One might think that the themes of Karin Broker’s exhibition are in response to the #MeToo movement illuminating issues of sexual harassment and assault. In fact, she has been addressing violence against women and how their strength and talents have been overlooked for quite some time. Like her last show here four years ago, this exhibition is accompanied by a limited-edition artist’s book (titled “love me, love me not”) in which she compiles her research regarding brutal acts against women. Issues raised in the book are also addressed in the works of art. A series of letters between a married couple during World War II is the basis of eleven large framed collages, which include skillfully drawn and printed bouquets of flowers and fragments of tissue paper from women’s sewing patterns. There are references to “women’s work” in her assemblages as well, many of which are constructed from antique irons called SAD irons. “Sad” is an old English word for “solid,” and the term “sad iron” is used to describe these metal implements. Broker has attached long-stemmed metal roses and embellished them with a tangle of woven wire and crystals. “First Wives” is a series of eleven such irons presented on one of Broker’s signature metal tables. “Second Wives” is a similar piece, through with slightly larger irons.

Another timely assemblage is “a pretty gun,” a small gun decorated with wire and crystals. Suspended inside a glass dome, it is presented as a precious object now rendered non-functional. In previous work, Broker covered objects with vintage rhinestone jewelry, and she achieves the same effect with wire and crystals in “my stilled heart sits waiting.” The heart is attached to a base made from painted tin, and the sculpture is displayed inside a Victorian glass dome. Like the collages with their letters, which begin with “Kay Darling” and are signed “I love you, Johnny,” Broker questions the myth of forever love and monogamy. In another assemblage titled “painful get-well bouquet,” she creates a spray of wire, crystals and metal flowers in a grey urn, a possible reference to the remorse often expressed by men after they attack a woman with whom they are involved. Broker creates impeccably crafted work about difficult subject matter wrapped in seductive materials. These powerful objects operate on multiple levels, expressing her attitude toward personal relationships and the evolving role of women in society.