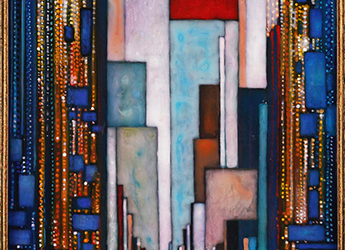 In the 1980s, a decade when artists commonly appropriated styles or imagery from earlier art historical periods, Mark Innerst became known for beautifully crafted natural and urban landscape paintings that gave new life to the American tradition of the romantic sublime. A master at creating luminous and gemlike surfaces using the time-tested techniques of layering and glazing, Innerst has consistently produced awe-inspiring paintings that are convincingly authentic in their expression of reverence for the depicted subjects. Similarly, his respect for the integrity of the art object has always been reflected in his practice of designing and constructing a unique frame for each painting.

In his new exhibition of work from the past two years, Innerst clearly has not lost his touch. The small cityscape "Tiffany" expresses a sheer rapture for the electrifying vitality of New York City at night. This truly melodic composition expands upon an idea introduced in Piet Mondrian's iconic "Broadway Boogie Woogie" (1942-43), where a flat geometric grid conceptualizes the structure and energy of the Big Apple. In contrast to Mondrian's emphatic two-dimensionality, Innerst presents a radiant three-dimensional vision of floating geometric blocks flanked by bejeweled vertical strands of light that function like curtains opening onto a dazzling view into virtual reality. Also noteworthy are several monochromatic blue paintings of people moving through the underground pathways of the New York subway system. While their blue palette suggests photographic cyanotypes, these paintings effectively veer into narrative and metaphoric territory.  In “Underground Platform,” hoards of anonymous people are shown tightly amassed on a platform that moves along a curve from foreground to background. Sheathed in a blue atmospheric haze and intermittently spotlit, the scene is invitingly mysterious and memorably haunting.