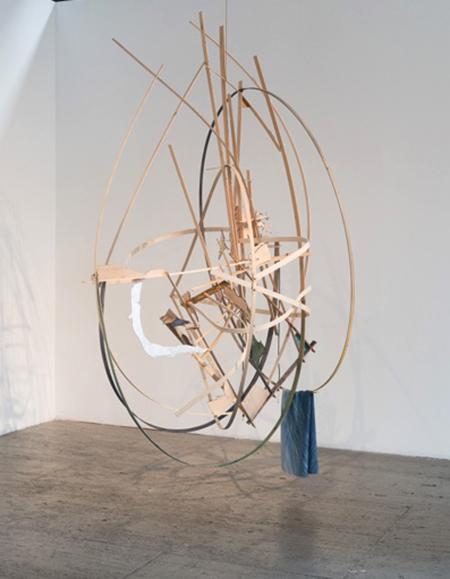 Alice Shaw’s photography-based work — gelatin silver prints, pigment prints, a video, plus a lenticular prints and two carbon pigment prints — explores identity in the age of simulacra, digital and otherwise, focusing on images of sheep, which were cloned back in 1996. While sheep are metaphors for herd mentality, they’re also traditional Christian symbols of obedience and sacrifice: maybe not what is called for at the moment. Shaw’s interest in doubling and the ambiguity of twins permeates all the works, from the large glass slide carbon print “Pair,” with its innocent lambs; to the tripartite “Ba Ba Black Sheep,” with its two identical white-sheep clones accompanied by a tonally-reversed black-sheep. “Stereo #1” is a color photo diptych of a penned sheep taken from slightly different camera angles. “North South” also consists of two color photos of the same sheep, but taken from opposite positions, with the prints leaned back to back against each other. “Two Sheep” is a lenticular photograph in which the two subjects fade in and out of sight as the viewer changes positions.

Adriane Colburn’s abstract sculptures in wood strips with metal fittings is shown with mixed-media (digital plus paint) works on paper, sometimes cut into intricate lattices. Both are visually compelling without adding a sociopolitical subtext, but they are enriched by their origin stories, which have to do with how scientific data and materials appropriate to the artist’s ecological concerns come together. “Ballad” replicates the global trade routes for exotic woods like mahogany and ipe. “Fairway” and “Strategic Center” are wall reliefs based on a satellite marine tracking system. These are fabricated in ash wood, which has become endangered by the Ash Borer beetle from China, which travels the globe in shipping pallets. “Fracklines” and “Midland (Oil and Gas)” are painted paper cutouts based on West Texas petroleum mining maps. “Marencini Mine (Copper)” and “Ponds” are replete with seductively colorful waste-water ponds. A terrible beauty is born.