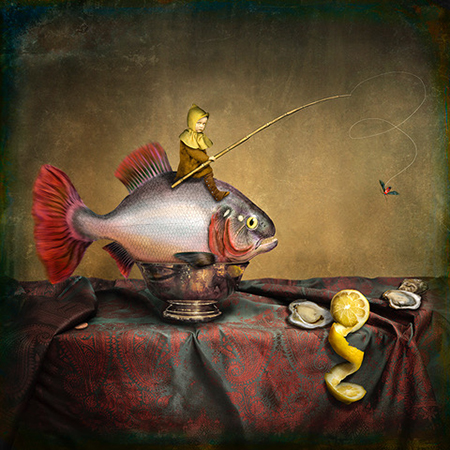 Maggie Taylor, “First the Fish Must Be Caught” from “Through the Looking Glass,” 2017, pigmented digital print

While initially studying philosophy at Yale University, Maggie Taylor began her interest in photography during her sophomore year. Later, while pursuing her MFA in photography at the University of Florida, she would arrange and shoot intricate still lifes as subject matter. Upon discovering Photoshop, however, her creative life changed. She began moving away from the camera and by 1996 had abandoned it completely, using a light-sensitive scanner instead. Three decades later, Taylor is known for her haunting and compelling digital prints. In 2008 she published her version of “Alice’s Adventures in Wonderland,” 45 illustrations accompanying Lewis Carroll’s original text. Her latest work, “Through the Looking Glass,” is the sequel to that series. Like Carroll’s books, published during the Victorian Era, Taylor’s pieces allude to the 19th century, utilizing tintype and ambrotype portraits from that period in the images. In “Through the Looking Glass, and What Alice Found There” (1872), Carroll returns Alice to the fantasy world by walking through a mirror. Taylor’s series includes many characters from the book, including Tweedledum and Tweedledee, the Red King, White Queen, Humpty Dumpty, the Lion and the Unicorn.

“They’re at it Again” depicts a fight between the Lion and the Unicorn, which are symbols of the United Kingdom, with the lion representing England and the unicorn Scotland. In the book, Alice is crowned queen, and in Taylor’s “Through the Looking Glass” and “And What Alice Found There” Alice is shown wearing a crown. Many of the book’s personalities appear in “The Feast,” including a walrus, the lion and the unicorn, a king, two queens, and a masked crow. As the book ends, Alice awakens to find her kittens on her lap. The black kitten and white kitten appear in several of Taylor’s prints as well and, according to Alice, they represent the Red Queen and the White Queen. Taylor frequents flea markets, antique shops, online auctions and her own backyard to collect artifacts for her work, including taxidermy specimens, mounted insects, vintage toys, sea shells, feathers, eggs and nests. She uses original photographs to create the backgrounds, which often include a body of water or a river. Creating the final prints is a painstaking process that requires the manipulation of multiple layers of digital images over weeks or months, as Taylor persistently pursues perfection. The results are ambiguous scenarios that are part daydream, part nightmare, and always fascinating.