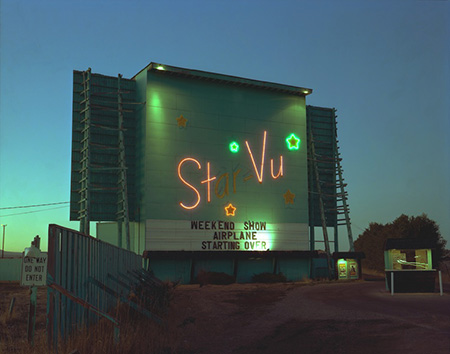 It took a long time for color photography to be considered art. When it began seeping into the museum world around the 1970s, art critics called it boring and banal, nothing more than material for advertisements or family photo albums. While discrediting the use of color in photography was a significant oversight, there is certainly an aspect of color photography that speaks to nostalgia. “Nostalgia is a tricky word: it implies a longing for, or romanticizing of, something in the past. … I now look at many of the photographs that I have made over the years and it is obvious that much of what I have photographed is gone or in ruins.  … It is as if I had a sixth sense that what I was making pictures of was going to disappear and that what I was doing was important,” says photographer Steve Fitch.

“Vanishing Vernacular,” a new exhibition of Fitch’s photographs taken mostly in the Southwest in the 1970s does feel nostalgic, yet the aesthetic quality of the images is immediately apparent. Fitch’s photographs do not feel like desperate attempts to document vanishing architecture, but rather an appreciation of the sometimes bizarre and certainly unique world of highway Americana. The stars of the show are Fitch’s photographs of neon motel signs at night. The images are haunting in their absence of human figures, they pose as eerie signposts on a lonesome desert road. “Vanishing Vernacular” also incorporates daytime photographs, several of radio towers and abandoned lots in what could be any part of America. While these images are less other-worldly than his night photographs, one still searches in vain for any human presence. Fitch is placing the viewer in the middle of commercialized, overly inhabited spaces with the people omitted, creating a unique juxtaposition of loneliness and curiosity.

The artist’s photographs inhabit a world that almost looks like our own, slightly but unmistakably unfamiliar. Not only are the truck stops and abandoned drive-in theaters architectural relics, the shockingly vivid neon of the motel signs against the lure of the darkened corners of the empty lots behind them make for an unsettling, yet riveting exhibition.