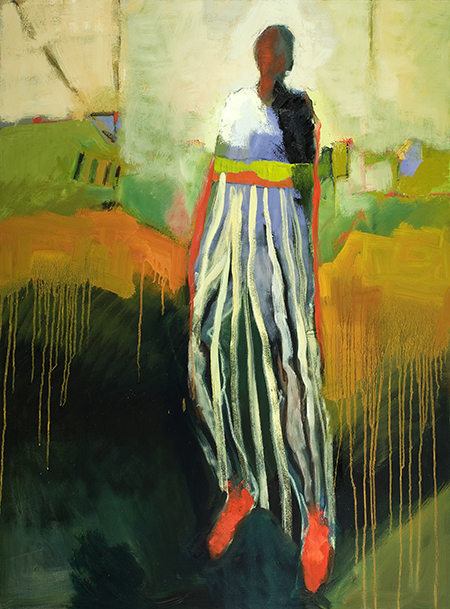 Kathy Jones, based in southern California, has been showing her figurative oil paintings for more than a decade. Here she continues her signature look, ambiguous standing figures without facial features standing in interior and landscape settings. While the facial features are non-existent, skin color vacillates between white, brown and black, sometimes all on one face. Similarly, dramatic moments are left subject to interpretation.

These new works employ single, double and triple-figure compositions. In “Up Next” a tall woman of color stands before sheets of yellow, green and brown, wearing loud striped pantaloons and orange shoes. The short hair gives the figure a contemporary look, but the missing arms make her look helpless and forlorn. “The Showgirl” is equally ambiguous: a Vegas dancer wearing a headdress and a skirt draped in fringe is posed in front of a darkened background.

“Tied Together” and “Just the Two of Us” address the simultaneous bonding together and estrangement of male-female couples. The largest painting on view (five feet square), “My Companions,” depicts three female figures against a background of distant hills and buildings. Of all the works here it comes closest to narrative: their staggered heights suggest a family hierarchy, suggestive of a mother and two daughters.

The shadows of Richard Diebenkorn and Manuel Neri, both of whom taught at Stanford when Jones was a student there, are so deep and long that Jones may never elude them, or deliberately chooses not to. Single, free-standing, faceless figures suited both older artists perfectly — and also inhibited their work from making any statements about gender, psychology or race, issues that have become more urgent to figurative painting now than in the past. This tugs against the formalist assumptions that inform an approach to painting that would have felt radical half a century ago.

“Finding Peace” and “Dressed in Patterns” at least point toward differing technical approaches, such as spattered paint, scumbled surfaces and layering color. The glow or hint of a halo around the head in the latter sacralizes the woman, with her back against a bright horizon. The latter is the most abstract image among the group, enmeshing a shadowy woman completely in painterly effects. “Farther Away” looks over rooftops. A woman of color in “High Wire” wears a blue halter and a see-through tutu over dark tights. With a rising hill behind her, she tiptoes on the top half of a wire or rope, her position visibly precarious. Another halo or white glow surrounds her upper torso.

A series of smaller, related paintings round out this selection of solid, accomplished work that, after so many years, could use further complication or a healthy dose of internal contradiction.