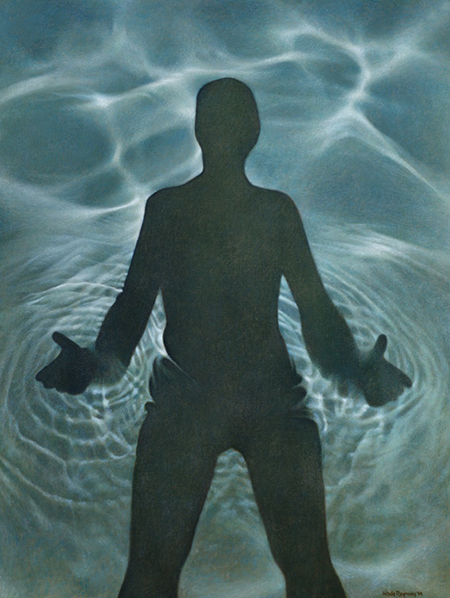 Incorporating the distinctively varies work of nine artists, “In Repose: Figurative Group Exhibition” is only the latest demonstration of the diverse range of interpretation the human form is subject to. From surrealism to hyperrealism, two dimensional painting to dynamic sculpture, “In Repose” is, if at times lacking in cohesiveness, certainly inclusive of styles worthy of our reflection.

The late Wade Reynolds (1929-2011), whose work the exhibition highlights, was a master of both form and light. His work is soft and warm, sensual and slightly mysterious. Self-taught, Reynold’s made himself a master of technique. Working in oil, three of the six paintings included here incorporate nude female forms, their faces obscured to emphasize the artist’s bravura skill in depicting the human form and in capturing the effects of light on skin. While the paintings are beautiful, the position of the bodies, recoiled into a fetal position on the floor, or perched with head on knees on a high chair, lend a somber quality to the images that in jarring but not so much as to be unsettling. With their heads turned away, the nudes tolerate our assessment of their form. “Pool Shadow” is a stunning example of his ability to capture light and demonstrates his skill in composition and movement, interpreting rippling water as if it is a photograph.

Reynold’s work pairs particularly well with paintings by Daniel Sprick and Lee Price. One of the contemporary masters of figurative painting, Sprick not only displays breathtaking technical skill, but a clear understanding of light and how it can be manipulated and experimented with in painting. In “Amelie” Sprick does not focus the lighting on his model’s face, but rather aspects of her body. “Julia” and “Austin” are portraits that are not only impressive in their photo-realistic quality, but in the warmth and light that to emanates from each subject. Price’s paintings are often large scale, and emphasize composition and form placed against a complex ground. “Surfacing” incorporates five panels with a repeating image of a woman submerged in a bathtub full of water in varying positions, bubbles of air from her mouth obscuring her face. It is easy to appreciate the skill of the painting at an observer’s remove because the subject’s gaze averts us.

While Reynold’s work is the clear focus of the exhibition, three large paintings by African-born Jorge Santos occupy a somewhat confusing juxtaposition that can be seen as a counterweight to Reynolds, Sprick and Price, whose hyper-realistic paintings serve as elegant and accurate interpretations of the human form. Santos’ paintings are surreal and bizarre, in this context striking a dramatic contrast to the realist painters.  “Soap Box King” draws our eye to an engagingly awkward, handsome young man standing half-naked against a desolate background. “Heartless” and “Love Memo” are among the few pieces here to incorporate multiple figures. They each tell a story feels rich in allegory and emotion, but the narratives are elusive. Santos’ work is well executed and inventive, but, large and engrossing as each work is, they would do better in their own gallery space.

Sculptural pieces by Kristine Poole, Christyl Boger and Javier Marin work well against the two dimensional selections. Poole’s life-size clay sculptures depict nude female forms seemingly caught between this life and another. Marin’s bronzes are classically influenced, yet brought to life with an active imagination that takes them into the present. Boger’s stunning and whimsical works flank the entrance to the gallery. These stark white ceramic sculptures outgrow the corners they’ve been placed in.

“In Repose” is an inclusive exploration of the human form as it is being interpreted today. The artists included persuade us that figuration today is demonstrating the ability to capture not only physical appearance but inner emotion retains fresh aesthetic possibilities. The show also serves to engage us in that most intimate of subjects, ourselves.