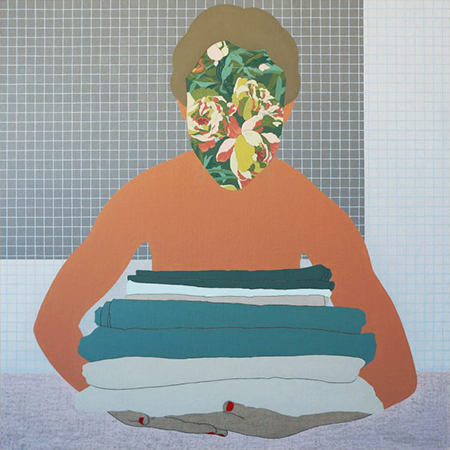 There is a static aura in Jeffly Gabriela Molina’s paintings. In her first exhibition at Kavi Gupta, “Suspiro” (“Sigh” in English), the Chicago-based artist depicts her figures encapsulated in moments of pause, pose or rest: smelling flowers, petting the cat, gazing into the mirror or out a window. Molina’s formal choices, too, contribute to this notion of suspension; with flat planes of color and the exposed graphite grid of her under-drawing, the physical paintings themselves feel halted in the midst of creation, caught somewhere between commencement and completion.

In “Detalles de una Cosa Sencilla” (“Details of a Single Thing”), the central figure is articulated with planes of neutral tones, and while his/her fingernails are carefully detailed, the oval that should contain facial features is instead filled with floral patterning. With arms wrapped around a folded pile of laundry, it’s impossible to whether s/he’s coming or going, taking it away or putting it down. This is a portrait without a likeness, a figure without a gender, and an anonymous pictorial space, leaving the viewer with only this brief, familiar interval to contemplate.