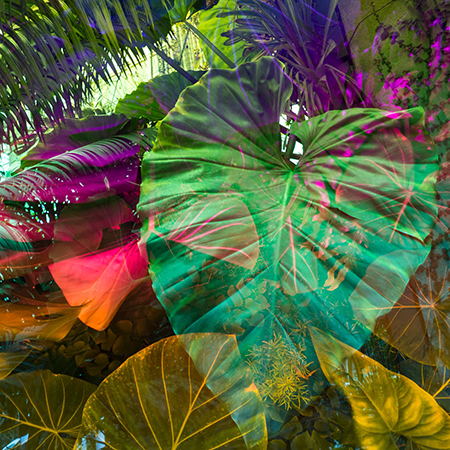 Nature and culture commingle in Karine Laval’s twelve “Heterotopia” color photographs, made this year, with still shots excerpted from a video that the artist made in 2014 of the rain forests of Costa Rica. The title means, literally, ‘different place,’ so Laval’s lyrical images, which layer realistic shots (enhanced by some digital magic) with layers of more abstract imagery—soft-focus veils of color, primarily, with some color-palette alterations—depict a poetic forest of the mind and the memory rather than a strictly botanical eye. “”Heterotopia {Remix}” was the title of Laval’s projection/performance piece created for her 2016 show at the Benrubi Gallery in New York titled Artificial by Nature and featuring music by bass clarinetist Aaron Kruziki. That event will be recreated at the exhibition reception on March 1 at Robert Koch Gallery. Those who miss that event can watch video of the Benrubi performance online — and, of course, take in the photos at the Koch Gallery. With their extreme close-up views of plants, and their mysterious lighting and color, Laval’s exotic, hybrid forest-primeval photos might be seen as digital-age re-imaginings of Philip Reinagle’s proto-surrealist paintings, adapted for Robert John Thornton’s classic 1807 book of botany, The Temple of Flora.