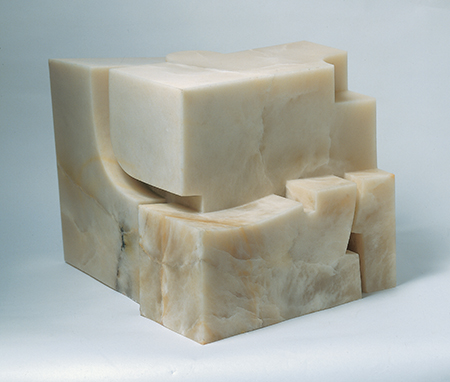 Eduardo Chillida, once referred to as “one of the three pillars of sculpture in the 20th century” by curators at the opening of the Guggenheim Bilbao, is well represented by over 65 works of art, comprised of drawings, sculptures, collage, and artist books. This gem of an exhibition occupies almost half of the museum’s second floor and was co-curated by William Jeffett, chief curator at the Dali Museum, and Ignacio Chillida, the artist’s son. Each of the pieces on view was chosen from the Museo Chillida-Leku in San Sebastian, Spain. Chillida is primarily viewed as a sculptor, but was just as comfortable working with paper. The majority of the works in this exhibition are paper, and they make the case. Several examples of Chillida’s sensual “Gravitation” series are included, like “Gravitation-In Praise of Water” (1987), where cut out papers are layered and woven together with thread. They are hinged at the top and hang suspended by string like delicate white linen on a clothesline.

The several ink drawings of hands titled “Mano” (1995) remind us that Chillida never considered himself an abstract artist, but one interested in space and interaction. His sculptures use form to carve out and define spacial relationships, and how the shapes and designs specifically alter the space and reconfigure reality via his ruminations on metaphysics.  He often took the rigid geometry of abstract sculpture as a starting point from which he bends the hard lines against themselves to produce humanized organic forms, as in the masterful “Our Father’s House (1st version No. 2).” Two cuboidal forms with open walls interact through the tension of circular phrases that never meet. Here, as in many of Chillida’s sculptures, these elements underscore space as a place where formalist dialog combines with direct experience to define what it means to be human.