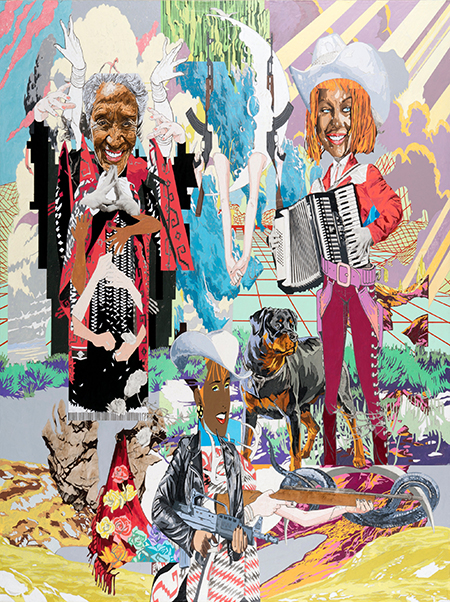 Dicochea’s audacious mash-ups are tongue-in-cheek on one hand, but laden with sociopolitical narratives on the other hand. The Mexican-born and San Antonio-based Dicochea draws inspiration from 18th-century casta paintings of colonial Mexico, in which artists purposely grouped mixed-race and mixed-class subjects into atypical family portraits. Here, humor steers viewers toward the socially progressive possibilities when, for instance, a smiling Malcolm X (who was nicknamed “Red”) is paired with the redheaded Agent Scully from “The X-Files” in “de la Agente Federal y el Rojo, la Emperatriz (of Federal Agent and Red, the Empress).” Dicochea ably messages the impact of colonialism, identity, racial biases and cultural stereotypes that linger through time.

Adding to the élan of the artist’s first major survey is the decision to mount the show on black walls surrounding a massive chandelier made of skulls and bones. It’s meant to underscore the point that, at a purely anatomical level, race, class, nationality and ethnicity are moot.