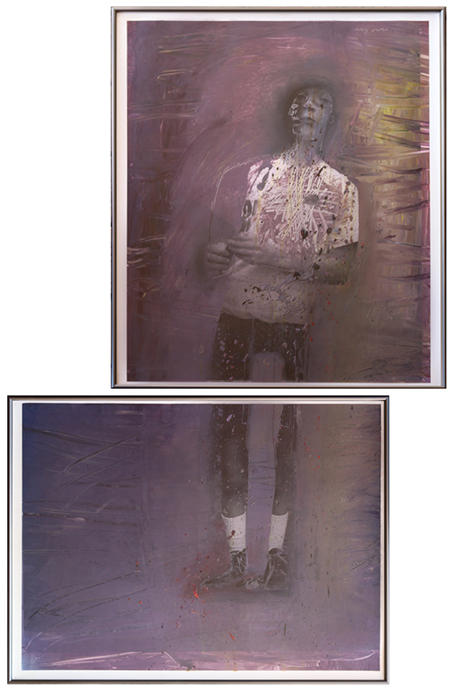 Though formally trained at the University of New Mexico (B.A.) and Arizona State University (M.F.A), New Mexico-based artist Holly Roberts draws from the style of intuitive artists, whose influence is apparent in Roberts’ work. “Looking Back” spans from her years as an art student, to recent mixed media works. Usually starting with a photograph, Roberts layers paint and other materials to create haunting, yet nostalgic images. Comprised mostly of human figures, the photographs which serve as her starting point hazily appear through the layers of paint. Roberts often uses the application of media to create outward boundaries for the forms in the photographs, as if the true self of the figure is trapped within the created space of Roberts’ outline.

“Girl Singing Inside Herself” is a striking example of this, in which a girl’s face feels trapped within the outline of her painted profile, effectively expression trapped within a façade. Some of the paintings in “Looking Back” are rather dark, both literally in the tonality of the paint, and figuratively in the emotional tone of the image. In “Boy Crying” a youngster stands in full figure facing the viewer, but is dissected in half, as the painting is a diptych. All background is erased by a hazy mass of dark purples, leaving the boy floating in a dark space. His body is obscured and deformed by Roberts’ brushwork, and the profile of a face in pain emerges from the boy’s own face, Roberts visualizing here a dual persona. Roberts has said of her work, “I am seduced by the magic of taking something and making it live as something else.” Her work is unique in its ability to capture not only realistic form, but a whole new life that Roberts brings to it.