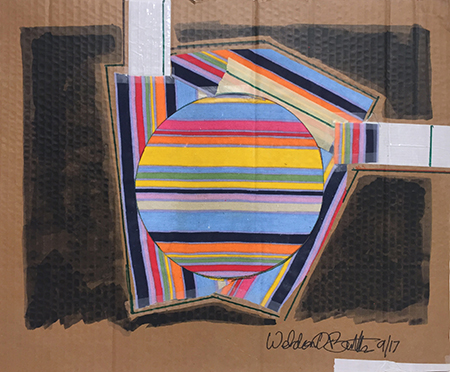 Weldon Butler is an African-American printmaker and sculptor who has an extensive background of gallery and museum shows but who, like many minority artists, has not received the recognition he deserves. This compact survey should help to correct that. Born in Philadelphia, Butler joined his brother in Tacoma in 1968 where he went on to attend Green River College and studied printmaking and sculpture. While making his art, Butler worked as a Boeing toolmaker, a mapmaker, an auto shop repairman and a commercial silkscreen technician, all of which had an impact on the look of his art.

Declaring, “When I need color, I go to Home Depot. I have a vocabulary of shapes, not a palette of colors, like a painter.” Butler’s eleven works on paper and three sculptures cover the years 1991 to the present and reflect the look of two-dimensional art made by sculptors: diagrammatic, linear, spatial and using rough, street-found or hardware-store materials. “Pivot” (2017) makes a striped umbrella fabric into a collage with intersecting planes of bright color, all locked in a black surround. “This Here” (1991) is classic Butler, a vivid red-orange background with a thin illusionistic outline of a volumetric solid shape covering it. Other works on paper, like “Rock Star” (2002), “Untitled” (2005), “Bull Moose” and “Tips” (both 2015) isolate colored mass — blue, black, yellow — within all-white or all-black areas. At 78, Butler seems influenced by Robert Motherwell among others, but his is an art of simultaneous spontaneity and rigid structure, more so than the Abstract Expressionist. Another Northwest artist, sculptor Robert Maki, comes to mind, but Butler uses color more felicitously and to undermine a sense of deep space or volume. “Lean To” (1997) could be a highly stylized and abstracted image of a homeless dwelling — or just an ambiguous polyhedron.

Butler’s volume of sculpture has always seemed smaller than his designs or plans. “Untitled” (2005) is an ingeniously curved piece of aluminum akin to industrial sheet metal working. Hanging on the wall, “Dunbar” (1997) uses tire treads, recalling other Black sculptors like Melvin Edwards or Barbara Chase-Riboud, but has a more intimate scale and collage-like appearance. “Tire Ottoman” (2002) is a hilarious spoof of a decorator stool with a twist. Tires are stacked to make the seat, but they also resemble the horrendous “rubber necklaces” that were used to light slaves on fire.

Amanda Knowles is a good match for Butler. Both artists address see-through structures and narrow, theoretical color choices. All part of a long series, Knowles’ 20 altered screen prints are ghostly images of various construction projects, now a ubiquitous sight in Seattle. They depart from urban realism into a realm of fantasy architecture, like a modern-day Piranesi. Like Butler, educated in Philadelphia, Knowles did graduate work at University of Wisconsin. The serial approach to her imagery can be wearying, but her interventions with graphite and acrylic paint individualize and soften the harsh implications of tall looming towers with grim gray and white colors, occasionally flashing pale green or pink underneath.

“Structures to Hold Up the Sky I-IV” (all works are 2017) conceal and reveal interlocking metal grids with cloudy, misty sheathes of blurry gray and blue. Despite such narrow parameters of imagery, each work is unique and offers a different vista of various imaginary building sites. Unlike Butler, who sticks to a flat surface in his works on paper, Knowles invites the viewer into an ambiguous, shallow picture plane somewhere in between the back of the lot and the space of the gallery.

“Frameworks (For the Sky) I-VI” and “Supports I-IV” are more abstract, with girders and planks easing in and out of view. With strong vertical shafts in the middle of each “framework,” light spills onto darker structures such as hydroelectric towers. In the “Supports,” colors intrude faintly, in contrast to Butler, and embellish rather than reinforce the organizing shapes. The “Built Environments” are more crowded, another allusion to Seattle’s runaway downtown construction perhaps, culminating in a triptych that, for once, gives the viewer more than a snapshot or glimpse of ongoing construction. Instead, a number of building corners and edges thrust forward toward the viewer, animating the surface and composition as a whole. With such limited means and narrow palette, Knowles runs the risk of defaulting to clever printmaking techniques rather than subverting them or using them to underscore an agitated environment of bustling work and displacement, all elegantly stated here without any sense of alarm or concern.