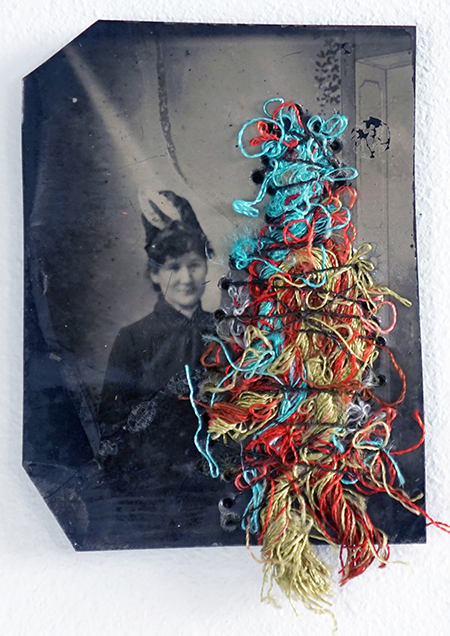 “To photograph people is to violate them,” states Susan Sontag in her book “On Photography.” “By seeing them as they never see themselves, by having knowledge of them they can never have; it turns them into objects that can be symbolically possessed.” The subjects of Jodi Colella’s exhibit aren’t so much possessed as they are obscured, ornamental, and as the title of her exhibition confides, unidentified.

While working on another art project in the archives of the Historic Northampton Museum in Northampton, Massachusetts, fiber artist Jodi Colella discovered a series of daguerreotype portraits. While the men in the photographs were often clearly identified, along with details of their lives and accomplishments, the majority of females were listed merely as “unidentified woman.” Colella began searching for daguerreotypes from the 19th century in flea markets and antique malls, resulting in her current exhibition, “Unidentified Women,” a collection of these found photographs embellished by Colella’s embroidery. Interested not only in the identities of the women in the photographs, Colella also became fascinated with the fleeting and undocumented social and historical role women played, and how those roles would sometimes lead them to face the camera.

While historically women have faced objectification, their presence in these daguerreotypes appears to be as literal objects; as either the accessory to the male subject, or as an unidentified figure whose only relevance would seem to be to the person carrying the portrait. There is no social value placed on the women in the images, and their identities have been lost in time. Yet these physical relics of their lives still exist, and in the present age where the majority of photographs never materialize into a physical object, a daguerreotype holds specific, material value. Colella raises that material value, adorning the daguerreotypes in colorful embroidery, while often further obscuring the female forms present in the images.

Using brightly colored thread, intricate patterns and French knots, bits of ribbon and synthetic flowers, Colella turns the daguerreotype originals into small treasures. The embroidery appears as if it is a natural aging process of the photograph, like barnacles accumulating on a sunken ship. The objects are small, often no more than 5 inches tall, made to fit into a pocket. Colella’s embellishment forces us to search for the faces the embroidery obscures. We are drawn to admire the clothing of the subjects, the direction of their gaze. By obscuring the faces of the women in the daguerreotypes, Colella does not further erase their presence; but rather compels us to spend more time with the subjects, to find the details we could so easily miss.

Of course we cannot ignore the medium with which Colella adorns these small portraits. Embroidery has historically been a woman’s practice, but rather than the perfect lettering and floral embellishment traditionally associated with embroidery, Colella’s embroidery is abstract, the form rather chaotic but still methodical. The embroidery in “Unidentified Women” is bold and powerful, creating energy and movement in centuries old images. It is almost as if rather than hiding the physical features of the women in the daguerreotypes, Colella is bringing out their inner spirit.

In an age where most “selfies” won’t survive a computer crash or a shattered cell phone, “Unidentified Women” reminds us of the satisfaction of viewing photographs. And while we will almost certainly never know the identities of many of the women in these images, it is a pleasure to see their likenesses find new life.