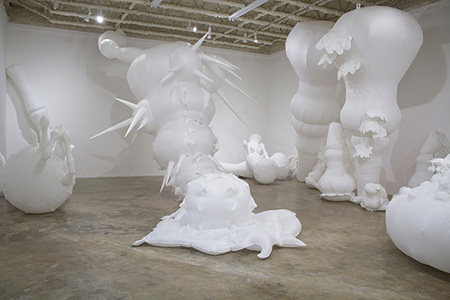 Nicole Anona Banowetz, "Being More than One," 2018, oxford fabric and blowers, dimensions variable

You hear it before you see it. The installation by Nicole Anona Banowetz that fills the main gallery is powered by blowers emitting a constant hum, a perfect accompaniment to these inflated soft sculptures. Large white forms lay along the floor, creep up the walls, and reach to the ceiling. Banowetz uses oxford fabric, cutting and sewing it together to create biopomorphic forms. Segmented tubes, spikes, leaves, fingers and molecular structures extend from the cores or rest on top of them. Selected pieces from the “Cordyceps” series become somewhat ominous after one learns more about them. Cordyceps, also known as the “zombie fungus,” are a type of parasitic fungus that invades the brain of an insect and kills it. Subsequently, the fungus grows up and out of the insect, generally taking the form of cylindrical branches, eventually exploding to spread spores that infect other insects. Sections of Banowetz’s installation resemble the fungus. In a previous series, she focused on rotifers, a microscopic animal that lives mostly in water and is similarly shaped. Recreating these animals and plants at hundreds of times their original size transforms them completely. Rendering them in white cloth gives them an appealingly innocent quality. Without titles or specific descriptions, they might appear benignly as billowing clouds or white pillows.

Other Banowetz’s series, like “Gentle Infestation,” “Being More Than One,” “Inflatable Vines,” and “Distended Defense,” a performance in which the artist wears one of the soft sculptures, reveal how her interest in little-known animals, plants, and minerals continues to evolve. She often places lights inside her soft sculptures and installs them on the sides of buildings or in atriums. Viewing them, one considers their symbiotic and parasitic qualities, as well as powerful survival skills. Banowetz heightens our awareness of how humans are integrated with other forms in nature. Understanding this interconnectedness, including those aspects that are less pleasing, may ultimately benefit the environment and everyone and everything that depends on it to survive. Hers is a playful vision that hooks us into a more serious reflection.