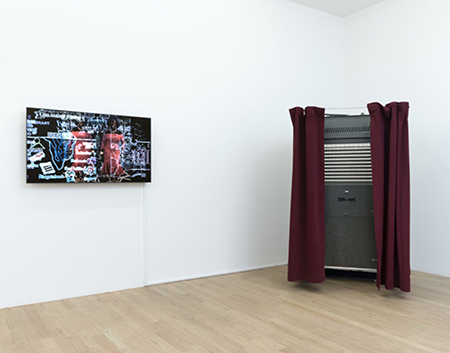 In an extremely poignant and clever survey of older and more recent works, R. Luke DuBois’ exhibition “A More Perfect Union” is a fascinating exploration of politics, demographics, and emotion. Combining antiquated mechanized systems with state of the art technology, DuBois creates interactive pieces that are as mentally engaging as they are visually interesting. All of the work in this collection incorporates political content. DuBois approaches his topics in such innovative ways that “A More Perfect Union” feels refreshing rather than heavy-handed.

Centrally placed, “Hindsight is Always 20/20” (2008) is a collection of optometrist’s eye charts that have replaced random letters with words like “GENTLEMEN” and “TERROR”. We learn that each of the 41 eye charts represents a different president from George Washington to George W. Bush, and that the charts document the top 66 words of each president’s State of the Union address. By condensing each to such a small collection of words, the work traces the change in political rhetoric and tone over the course of America’s presidential history. The titular piece, “A More Perfect Union” (2011), is a less blatant, but still politically topical, featuring a large-scale map of the United States. A closer look reveals that city names have been replaced by words like “Companion” and “Curvy”. In 2010 DuBois joined 21 dating services and downloaded 19 million dating profiles. He then collected recurring words by zip code, and replaced cities across the country with the most frequently used words in their area.

Throughout the many works included in “A More Perfect Union,” DuBois collects coded information en masse and finds a way to personalize it. While proving that we are all part of a demographic, and that we are essentially just numbers in a census, he also finds a way to capture our hopes, our fears and our imagination.