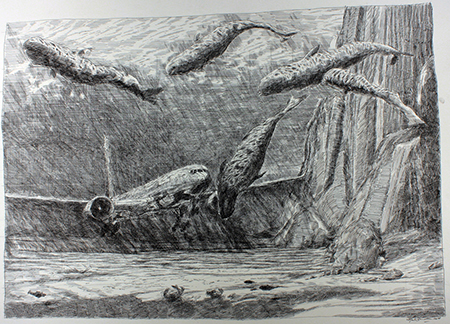 Veteran painter Henk Pander presents a suite of ink-on-paper drawings executed over the last five years. Born in 1937 in the Netherlands, Pander points to the traditions of the Old Dutch Masters as lodestars of his technique, yet the large-scale oil paintings that are his calling card are notably looser and more illustrational than the iconic artists he reveres. His subject matter has long tended toward postapocalyptic tableaux and related scenes of disaster brought about by human nature and technology. The drawings that make up this exhibition are no exception.

In “Abyss” a jet plane rests at the bottom of the ocean, surrounded by a pod of whales. The dinosaur in “The Gate” is flesh, blood, feathers and scales in its hind parts, but devolves into a skeleton as it passes through the eponymous passageway — a portent of Ozymandian hubris. Dying humans and mangy dogs populate the battered fortress in “Hunger Did What Sorrow Could Not,” while the nude woman in “Shame” is cast out of a decidedly un-Edenic hamlet. In years past Pander’s imagery could seem indulgent or morose. It’s not as though he suddenly changed tone or abandoned the pointed visual rhetoric. However, in our era of an erratic despot who brags about the big button he can push at any moment, images of a coming apocalypse assume an alarming realism. We may only hope that Pander’s vision proves metaphorical and not prescient.