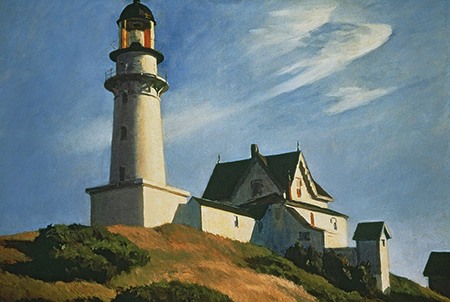 Having originally taught English literature in a university night-school setting for a decade in the 1980s, I later realized that, during the day, I was becoming an art critic, concentrating on transitioning from reviewing books to reviewing art exhibitions at the behest and encouragement of both artists and magazine editors. Eventually, the downtown satellite campus closed and my role as "adjunct instructor" ended. Meanwhile my activities as an art critic increased. However, I have retained a strong interest in fiction and now, having known so many artists, there are a pair of novels I believe artists and fans of art would enjoy reading. They are short, they are clearly written, and each is peripherally or directly about being an artist and art-lover. One is comic and the other is in-between, as Virginia Woolf's books are frequently categorized.

"To the Lighthouse" (1927) by Woolf (1882-1941) is one of the greatest novels of the past century — and one of the shortest. Although the main character, Mrs. Ramsay, dies half-way through the book, the other main character, Lily Briscoe, is a painter who remains haunted by the older woman's beauty, hospitality, and wisdom. Lily is working on a summer landscape while a guest at the Ramsays' beach house on the Isle of Skye in Scotland. Other guests include a couple who get engaged while there, an aging poet (and former opium addict who becomes a great success later in life) and a Cambridge protégé of old Mr. Ramsay's, the distinguished scholar, grumpy husband and father of five children (like Virginia Woolf's father).

So far, the plot sounds much like the family and friends in Woolf's own life (her mother died when she was 13) and Woolf admitted that, in writing the book, she was able to purge her grief for her mother once and for all. Filled with beautiful descriptions and thoughtful interior monologues by various characters, the story is driven by a plan to row out to the nearby lighthouse. Much of the book is filled with hesitations, plans, revisions and finally the trek over water to the vaguely symbolic destination. Lily Briscoe is painting the whole scene (as Woolf is writing the whole book) and, when they arrive, Lily sees the landing party and realizes her painting is done, too. It's one of the most radiant conclusions to a novel ever written, summing up the artist's challenges and satisfactions: "With a sudden intensity, as if she saw it clear for a second, she drew a line there, in the center. It was done; it was finished. Yes, she thought, laying down her brush in extreme fatigue, I have had my vision."