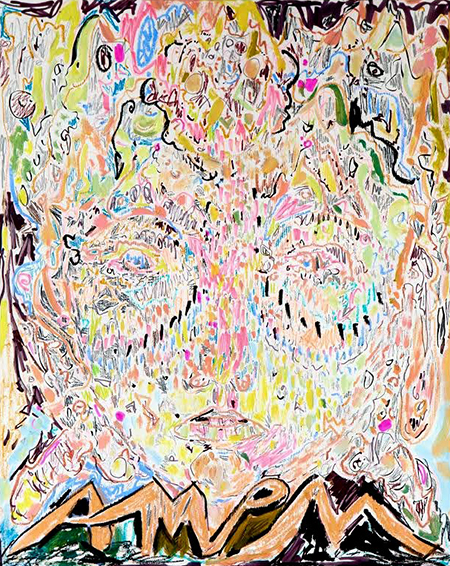 Long a familiar presence in the Portland art scene, painter Hayley Barker has for the last three years been based in Los Angeles. In the mixed-media paintings that comprise “AMPM,” she depicts a goddess-like figure who confronts the viewer with an implacable visage, crowned by a floral headdress. Who is this proto-feminist idol, and is she a totem of pulchritude, fearsomeness, or both? Barker leaves such speculations to the viewer.

The show’s title alludes to false dichotomies between day and night and the ways in which artists move fluidly between them. The painter has retained the dense jots and dashes that characterized her previous brushwork, but has pared back her lush impasto for a more graphical sensibility. Viewing the current compositions is like gazing through her older pictures with the benefit of X-ray vision: laying bare the maze of mark-making that undergirded those earlier works without the distraction of surface effects. The obsessively compact lines and reiteration of the same semblance in painting after painting yields fresh insights into the imagination of a painter intent upon themes of mysticism and metaphor.