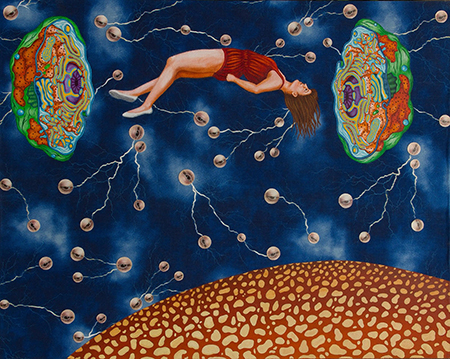 Lezley Saar, "Cosmic Tones for Mental Therapy," from "Monad" series, 2014, acrylic and digital photographs on fabric on board, 16 x 20"

Installed in a triangular gallery space, ”Lezley Saar: Salon de Refusés" is a stunning exhibition featuring three series of mixed media paintings completed by the artist over the past five years. Every painting features quirky Victorian era characters who are either sensitively humanized in the form of dignified portraiture or shown in visionary narratives that read as improbable flights of fancy. As a biracial woman and mother of a transgender son, Saar is particularly attuned to issues facing those whose identities lie outside traditional cultural norms.

In her series "Madwoman in the Attic/Madness and the Gaze," she brings a sympathetic focus to a number of eccentric female literary figures, as well as to so-called "afflictions" that were commonly assigned to women in the 19th century, such as hysteria and melancholia. In the “Monad" series, Saar explores the human connection to the cosmos by placing female protagonists in delightfully imaginative galactic universes, where stars are replaced by human eyes that function as metaphors for the artist's introspective approach to understanding the nature of being. Her most recent series, "Gender Renaissance," explores issues of gender identity and fluidity using a style based on Victorian and Edwardian portraiture. Many of these figures sport regally fanciful clothing, headdresses, or appendages. Lending an appropriately gothic tone to the exhibition is a site-specific installation at the gallery's center. A decrepit looking sitting room filled with antique furniture and utilitarian objects, old books and a skull, the setting convincingly conjures of visions of Victorian era ghosts.