“There is No Alas Where I Live”
Jenkins-Johnson Gallery, San Francisco, California
Review by DeWitt Cheng 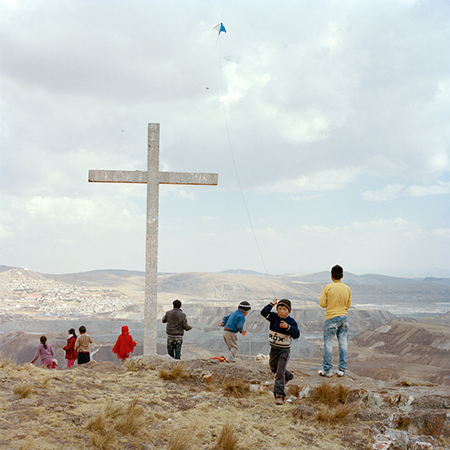 The title of this show of nine contemporary Bay Area photographers, “There is No Alas Where I Live,” is taken from Theodore Roethke’s 1951 poem, “I Need, I Need”: “Whisper me over, / Why don’t you, begonia, / There’s no alas / Where I live.” The independent curator Ann Jastrab, formerly director of San Francisco’s now-closed RayKo Photo Center, was fascinated by the idea of a photo exhibition based on Roethke’s words, and accordingly chose some eighty images by nine contemporary Bay Area photographers: Wesaam Al-Badry, Johanna Case-Hofmeister, Hiroyo Kaneko, Kathya Landeros, Eva Lipman, Paccarik Orue, Mimi Plumb, Josh Smith, and Lewis Watts.

Jastrab writes: “… life ... can be so magnificent and challenging simultaneously. Photographs are documents of ... this dichotomy, and photographers are witnesses, participant-observers, lovers of life, those who rage over unfairness, and those who present truths. Beauty and truth. There is no alas where I live. There may be grief and there may be concern, but there is no pity. Really, there’s not. Because you can’t be alive, truly alive and use that word alas. It is a word akin to regret or being forced to accept those things that you don’t want to choose.”

In our age of assertive victimhood, the denial of ‘pity’ may sound as heartless as the victim-blaming delivered regularly by our debased capitalist Christians, but that would be to misread Roethke, who was emotionally sensitive but morally tough. It would similarly misconstrue these photographers, who document life in tough times with understanding and empathy but without polemics or political comment. Indeed, the photos could be interpreted as embodiments of Nietzsche’s concept of Amor fati, the acceptance of the totality of one’s life: “That one wants nothing to be different, not forward, not backwards, not in all eternity. Not merely bear what is necessary, still less conceal it ... but love it.” It’s a mystical concept, and not in tune with materialist American culture with its cult of bootstrap individualism. One picks oneself up and starts all over again.

Jastrab again: “A lot of [the] work is documentary based. Some of it is romantic, some of it is street photography, some of it is social documentary. But what brings it all together is that the places featured in the work have hit hard times.” Americans facing the prospect of hard times now or in the future should find these images of daily life in different cultures and places resonant.

Al-Badry’s documentary photos diptychs of the Deep South — the Mississippi River Delta, to be specific — capture the cultural strength of the black community. The two conjoined panels of “Wedding Party” show, respectively, a guest arriving for the ceremony and two young men, posing — presumably groom and best man. The pictures are formally linked by a stripe of red tile on the wall. Moving north, Case-Hofmeister’s two large photos depict young white girls swimming, idyllic images of summertime leisure given an odd, contemporary twist through the camera’s random disjunctions. “Ariel in the Quarry” might almost be a Degas woman bathing but for the striped bikini bottom, the inner tube, the reflections of trees and clouds in the calm, Bermuda-blue water, and Ariel’s hidden head. The traditional theme of people enjoying the outdoors in different seasons informs Kaneko’s “New Memories” series, depicting the seasonal activities of his hometown of Aomori, Japan — picnicking and bathing for spring and summer, harvesting for fall, and snow shoveling for winter — but with contemporary notes. “Bathing #10” shows a pale blue sea seen from beneath evergreen branches, but the bathers, two young couples in matching magenta T-shirts, sit in a square in the sand, we imagine conversing, picnicking or playing instruments, and flanked by a striped tent pavilion, a changing room rendered peek-proof with plywood sheathing.

Landeros explores the Latino culture of the Central Valley (where she grew up) and of rural eastern Washington in her examination of Mexican immigrants in the West, finding beauty amid what we urbanites (sometimes not so urbane) consider flyover county. The posed but informal group portrait, “Juan’s Family, Eastern Washington,” conveys pride and dignity that even strangers can perceive and appreciate, while her “Main Street Laundromat, Eastern Washington” captures the humble, Hopperesque beauty of a laundromat at dusk, just after sunset, set against a curtain of dark hills. Lipman, a documentarian, captures the rituals of male adolescence and adulthood in the beautifully composed snapshots of her “The Making of Men” series. “Boy Scout Jamboree, Virginia” examines the male-pack phenomenon of scouting, while “School for the Humanities High School, Prom. N.Y.C.,” depicts the telling detail of young women, close-dancing with boys, holding reassuring hands with each other. Orue depicts the world of mining in Peru’s central highland in his “El Muqui” project (named after an asphyxiating goblin in Peruvian lore).  “Cruz de Paragsha, niños, cometas y desmonte” (Paragsha cross, children, kites and forest) depicts a rocky hilltop dotted with scrub, with villagers hiking past a huge concrete cross without observing it, and a small boy, the only one facing us, flying a kite that visually echoes the cross.

Plumb mines her images in the American West, both indoors, with flash photos of solo night-clubbers; and outdoors, with panoramic landscapes that belie their modest size, like the brooding and desolate “Mt. St. Helen,” or the bizarrely burned tree stumps and loping canine in silhouette of “Palm Desert.” Smith documents family life with two young sons in his “The First Years” series, balancing paternal tenderness with a sharp eye for ironic and humorous compositions; “Boys on Top of Vanessa in the Grass” is a wonderful hurly-burly of tangled limbs that probably lasted two seconds, while “Wyatt’s Hand From Under the Blanket” wittily conveys both the child’s wonder and wondrousness. Watts, the ninth in our alphabetical listing, has documented the unique African-American culture of New Orleans for more than two decades. His “Brass Band on Claiborne Ave. in the Tremé After Playing for a Funeral” (2008), shot three years after Hurricane Katrina, expresses the pride of its six young musicians, inheritors and eventual transmitters of a culture and tradition. “Raising the Casket, Funeral Procession in the Tremé,” perhaps shot on the same day, likewise acknowledges, with his white-gloved pallbearers supporting the deceased, the transience of life and the continuity of generations.