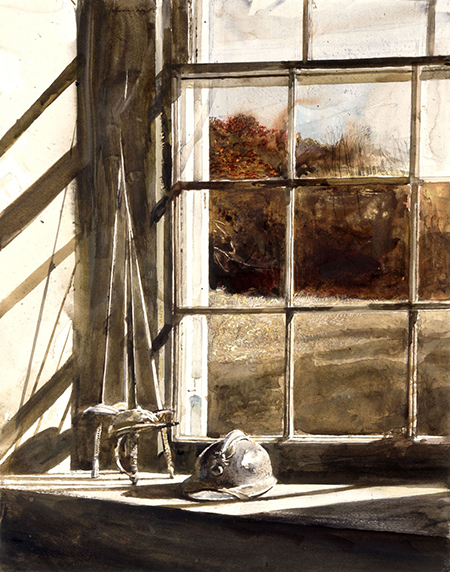 What Maxfield Parrish was to the honey-lit arcadian idyll and Norman Rockwell was to cornpone fantasias of Main Street U.S.A., so Andrew Wyeth was to the windswept fields of Pennsylvania and New England and the flinty habitués who made these singular landscapes their home. Like Parrish and Rockwell, Wyeth enjoyed prodigious popular and financial success but was not welcomed into the pantheon of major art historical figures. He was widely considered a reactionary in a 20th Century far more beholden to the violent gesturalism of AbEx, the cheeky commodity critique of Pop, and the crystalline theory of minimalism. This year, the hundredth anniversary of Wyeth’s birth, has provided cause to reconsider the artist’s place in his own time and the art historical narrative. Like “Andrew Wyeth: In Retrospect” at the Seattle Art Museum, Portland Art Museum’s sprawling “The Wyeths: Three Generations” affords viewers a wide-angle portrait of a sometimes controversial artist. Unlike the Seattle show, PAM’s exhibition contextualizes Wyeth (1917-2009) within the bookends of his father, N.C. Wyeth (1882-1945) and son Jamie Wyeth (born 1946), as well as his sister, Henriette Wyeth (1907-1997) and brother-in-law Peter Hurd (1904-1984). The show subtly highlights the painters’ family dynamics as well as their differences in subject matter and technique.

Intuitively laid out by curator the Museum's director Brian Ferriso, “The Wyeths” leads viewers through three main galleries in chronological fashion. Each gallery is appointed with wainscoting and taupe-painted walls, which impart an ambiance evoking the traditional interior design of the Eastern Seaboard. The first gallery is devoted to the accomplished illustrator N.C. Wyeth, whose illustrations in classic books by Robert Louis Stevenson and Washington Irving made him a household name and a wealthy man. In paintings such as “Defend Yourself, for I Shall Not Spare You” (1927), his gift for staging scenes of dramatic poses and action is on clear display. But it’s in his more intimate maritime imagery, as in “Eight Bells” (1937), that his introspective nature asserts itself, as well as his ambitions to escape the ghettoized fiefdom of book illustration. If the elder Wyeth aspired to ascend into the echelons of fine art, it was an ambition he never realized.

Andrew Wyeth holds court in the larger second gallery, and while his iconic “Christina’s World” and once-scandalous “Helga” portraits do not number among the paintings exhibited, there is a wide spectrum of Wyeth’s output represented. In “Undetermined” (1998) and “On the Edge” (2001), we see how the artist’s drybrush technique and predilection for egg tempera influenced the style that became his trademark. There are no flashy passages of impasto, no virtuosity for its own sake; but rather an impeccable craftsmanship and an arid, desiccated atmosphere. Andrew Wyeth’s America is not sunlit and generous but chilly, withholding, haunted. That his aesthetic celebrated the landscape and people of rural America may be the most pervasive misconception about his work. One of the exhibition’s major insights is that Wyeth was not celebrating per se, but scrutinizing, interrogating, dissecting and embalming his heartland.

A welcome levity comes in the final gallery, dedicated to Jamie Wyeth. This artist’s delight in off-kilter whimsy is evident in “Pumpkinhead Visits the Lighthouse” [2001] and the droll cow portrait, “Number 86” [1980]. It’s an expression that stands equally in contrast to his father’s world-weariness and his grandfather’s melodramatic romanticism. And yet not everything is given over to winks and nudges. The artist’s sketches and paintings of ballet sensation Rudolph Nureyev inhabit the tradition of aristocratic portraiture of the van Dyk/Gainsborough/Sargent lineage. The psychedelically hued “The Church” (1999) updates a staid architectural trope with a dose of nuclear-winter apocalypticism. It is perhaps unsurprising that Jamie Wyeth’s sensibility strikes us as the most contemporary, since he was born mid-Century and shares many of the thematic and pictorial concerns of post-War and contemporary artists. On leaving the exhibition, one is struck at the chronological and social journey from 1882, the year of N.C. Wyeth’s birth, to the present — from an era when people read adventure books about heroes and swashbucklers, to our current day of streaming video, omnipresent screens, and irony. One is left feeling befuddled at how we got from there to here, and with an unshakeable nostalgia for the way we imagine life felt in simpler times.