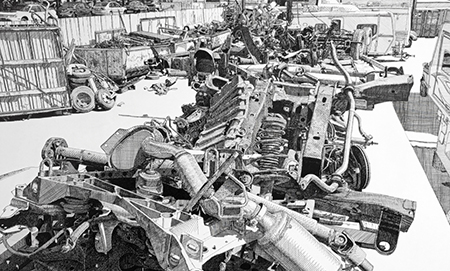 Ichiro Irie’s alliteratively titled "Garmonbozia Sagrada" presents work from two, perhaps three bodies of work, but it’s worth it just to see "Impermanence 2" alone, a large scale drawing using black “permanent marker” on bright white canvas. “Permanent” is in quotes because the marker will fade over time, the car junkyard depicted will therefore gradually disappear. The stunt aspect of that work aside, it’s a beautifully rendered image: Irie cross-hatches his pen with incredible deftness, producing an effect that is visceral up close and photographic at a distance. It's a specific style of wide, cross-hatched rendering on a large scale that I’ve never seen. While that work steals the show, that does not take away from his impressive "Imposter Series," in which iconic movies are referenced in black-and-white poster putty on panels, the most recognizable being the penis-and-balls sculpture from "A Clockwork Orange" (titled “Alex”). It's one of the greatest clashes between benign, classical chiaroscuro rendering and its very non-benign object you’ll ever see. “Love” and “Hate” are four-knuckle rings that Radio Raheem wore in "Do the Right Thing." A grouping of six smaller, vertically-oriented putty-on-panel pieces, also from "The Imposter Series," are graphically flat and more enigmatic in terms of their sources (religion, cults). But they make a nice counterpoint to the large, masterful drawing and its two small pen-on-paper offspring.