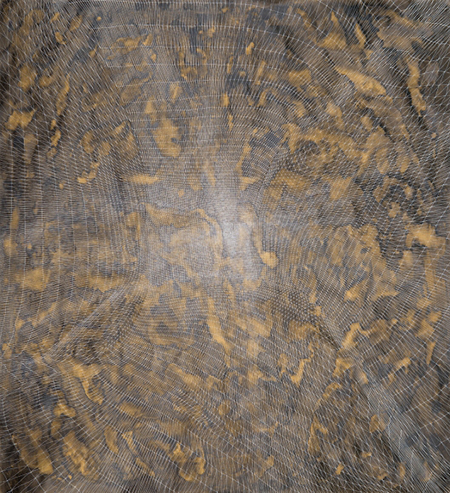 British artist Sam Messenger depicts networks of veils (which contribute crucially to the title of most of the works here) composed of interlocking triangles that suggest fishing nets or Buckminster Fuller’s polyhedral domes. But there is nothing mechanical or geometric about these white membranes, which float again dense black grounds or modulated black ink washes that suggest brooding skies or galactic clouds in deep space. Some of the works’ linear meshes are drawn with a special pen designed for tattooing. In the case of three large works from 2014, thin muslin that has been laminated to the canvas, irregularly, so as to yield wrinkles or pleats here and there. These wavelets or warps call attention to the artwork’s materiality and surface, playing against the illusion of deep space demarcated by the floating membranes. Thirteen small to medium-sized works on paper were created this year. They call to mind the overall compositions of Mark Tobey’s abstract yet archaizing white writing paintings, the sheer calligraphic density of which often formed into cosmological clouds, and Vija Celmins’ constellations and spider webs.

Messenger’s background includes technical drawing and graphic design, as well as a study of the Fibonacci sequence and the Golden Mean (which has influenced artists as disparate as George Bellows and Dorothea Rockburne, as well as Greek temple architects and Mother Nature), but he complicates whatever science underlies his meshes by drawing them without preplanning, letting them grow organically. (In the past he has mixed pigment with snow, which was allowed to melt, or soaked his paper in flowing river waters, thereby creating aleatory, nature-assisted ink washes.) In addition, many of Messenger’s titles in the "Veil Series" reference Greek mythology: Erato, Melete, Thalia and Harmonia, muses or goddesses; and Iasion, Electra, Neleus and Pelias, heroes and demigods.