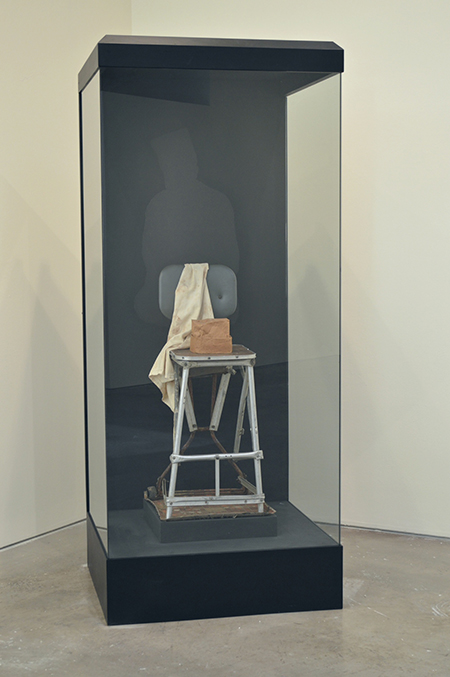 Nancy O’Connor has been on a journey with Milam Thompson since she was a teenager, and it continues to engage her more than four decades later. This show was inspired by her 1984 exhibition, "Milam’s Journey" at the Contemporary Arts Museum Houston. O’Connor met Thompson, an African-American ranch cook and cowboy, when she just 14 and living on the O’Connor family ranch near Victoria, Texas. Thompson lived nearby in the Gulf Bend area of the San Antonio River, and O’Connor admired him for the way he would take cast-offs and fashion them into useful objects. "Out of the Darkness & Into the Marvelous" includes two of his creations, “Dream Chair” and “Chicken Ballet.” Thompson wanted a chair that was tall enough for his kitchen counter, so he added wheels in anticipation that when he got old, he could roll it around with him. “Dream Chair” is the original he created back then, now transformed into a folk-art sculpture.

Equally compelling is “Chicken Ballet,” which was once a small trailer constructed from road signs. Thompson enlarged and actually lived in it before turning it into a chicken coop. O’Connor remembers looking in the window and seeing a white chicken darting back and forth. She has recreated the magic of that moment by installing a video of chickens inside the coop that can be viewed by peering through a crack in the screen door.

O’Connor draws on such powerful early impressions as subject matter for new work. In the front gallery are five large sheets of glass engraved with Thompson's stories. He was largely self-taught, and chopped cotton to earn extra money to pay someone to teach him to read and write. When O’Connor interviewed him she tacked up large sheets of white paper and asked him to write his stories down. She had them engraved on glass, which is placed on a shelf under a spotlight, causing the words to be projected onto the wall. Thompson, an orphan, in one account writes about how difficult it was adjusting to life after his grandmother passed away. Two half-sisters he previously did not know came and took him away to live with them.

“Colleto” is title of a mesmerizing video and the site of a famous battle in the Texas Revolution, as well as the name of a creek near the O’Connor ranch. This panoramic work conveys the serenity of nature, which was vitally important to Thompson, for he viewed nature as his family and a source of protection. Also included in the show is a sound sculpture featuring an audio loop of Thompson talking about love. For O'Connor, this man represents an earlier and simpler time. His stories are as powerful to her now as they were when she first met him so many years ago, and her work continues to resonate with his spirit.