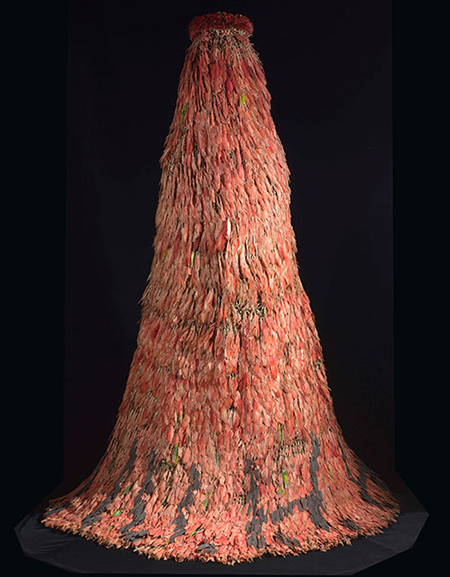 "Visual Voyages: Images of Latin American Nature from Columbus to Darwin" allows us to be time travelers, lending insight into how Europeans came to see the New World. Curators Catherine Hess and Daniela Bleichmar have assembled some fascinating maps and artifacts, art and illustrations, manuscripts and books from the late 15th- to the 19th-centuries. Some accounts are by actual visitors and residents, but many early ones were by fabulists who freely drew on their imagination and prejudices, affirming and creating myths as well as stereotypes about indigenous culture.

The most striking object is in the first gallery — an exquisite, full-length cape made of thousands of red feathers, attributed to the Tupinambá people of Brazil, dates from the 17th century. Worn in ceremonies, probably by shamans, there are only about a dozen in the world, and this one is in exceptional condition. Nearby are two illustrations about the cultural collision that is a main theme of this exhibition. They are two versions of the same image, "The Discovery of America: Vespucci Landing in America” (ca. 1600). One is an original ink drawing borrowed from New York’s Metropolitan Museum of Art, the other an engraving from the Huntington’s own collection. Both describe the imagined meeting between Amerigo Vespucci, the “discoverer” of America, and a female figure, representing America, at a shoreline. Vespucci is fully clothed and holds a staff topped with a cross in one hand and an astrolabe in the other — symbolizing Christianity and civilization. Meanwhile, “America” is nude, about to step down from a hammock where she has been napping. In the background her tribesmen are roasting a human leg, since cannibalism was presumed to be part of the uncivilized culture she represents.

Later works are more objective, more about the observed, and sometimes even more admiring, as Europeans became interested in what their colonies in Latin America really looked like. For example, the Royal Botanical Expedition to the New Kingdom of Grenada of 1783–1816 recruited 60 local artists to create illustrations of indigenous flora. The exhibition presents 20 of these beautiful drawings, borrowed from the Archivo del Real Jardin Botanico in Madrid. These are gems of elegantly arranged leaves, tendrils and flowers on paper. The exhibition is full of such surprising highlights, and presents a unique opportunity to learn about the history of our hemisphere.