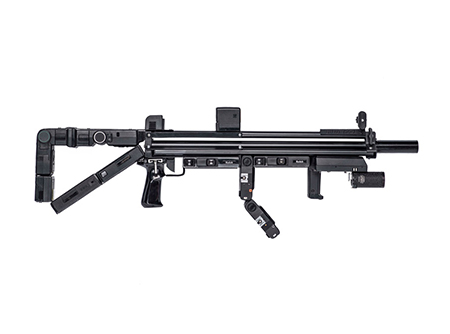 The image of a gun might be one of the most polarizing sights in today's social and political climate. "Shoot Portraits Not People" features photographs by Jason Siegel and sculptures by Keith D’Angelo. Both recognize this reality, and they unflinchingly confront the imagery associated with gun culture. The photographs and sculptures on display portray near exact replicas of guns and other tools of warfare. These implicitly encourage the viewer to engage with objects that many find uncomfortable or offensive. A closer look reveals that the weapons are made entirely and ingeniously of recycled camera parts.

The gallery is set up like a war bunker, but instead of bullet shells, empty film cartridges are piled on the floor. Grenades made of stacked camera lenses, and Uzis formed out of old Kodak cameras look very much like the weapons they emulate. By replacing destructive machines with creative tools, "Shoot Portraits Not People" is not only a stunning for the simulation, but also packs an emotional social statement. Going beyond this, the objects here also enable us to appreciate the intricacies of machinery, whether creative or destructive.

Siegel’s photographs of the "weapons" highlight each form on a stark white background with detailed precision. They add sufficent distance from the objects to permit appreciation of Siegel and D’Angelo's deft use of found objects. The pure form of the faux weaponry is balanced by visual rhetoric that condemns their violent use as firearms. Part of the proceeds from this exhibition go to the victims of the 2017 Las Vegas shooting.