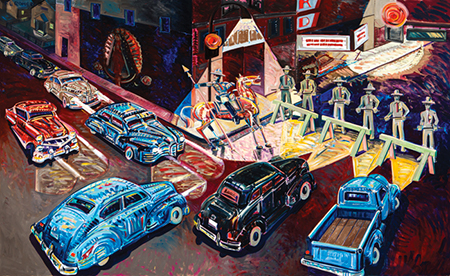 A small but well selected retrospective of works by Frank Romero is a festive yet bittersweet exhibition, in that it is the final show at the Tobey C. Moss Gallery, with the owner retiring at the end of December. Seeking to end her gallery's 39-year tenure with a project that is uplifting, Moss was drawn to Romero's work for its vibrancy as well as for its cultural significance. Romero (along with Gilbert “Magu" Luján, Carlos Almaraz and Beto de la Rocha) was one of "Los Four," the pioneering Los Angeles-based Chicano artist collective that was formed in the 1970s.

The exhibition demonstrates that Romero is at his best when documenting low rider culture, and iconic prints such as "The Closing of Whittier Boulevard" and "Dolores' Drive-In" reveal his mastery of bold coloring and dramatic lighting used to capture the spirit of the nightlife that the artist remembers from his youth. While the majority of works are focused on cars, the exhibition also includes "Deer Crossing," a playful painted wood construction from the late 1980s, and "Los Caballeros de la Noche,” an early woodcut that blends elements of cubism and surrealism that won the artist first prize at the California State Fair when he was a teenager.