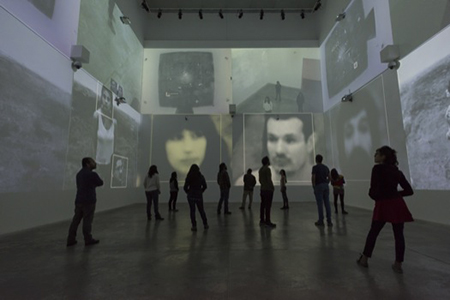 After more than a year of renovation, SITE Santa Fe recently opened the doors to its stunning new art space. The structure itself is worth a visit, with a striking metal façade that leads into the building which was originally a beer warehouse. The interior is full of light, with high ceilings and concrete floors, the perfect setting to house the space’s inaugural exhibition, "Future Shock." The exhibition incorporates the work of ten artists, including Doug Aitken, Tom Sachs, Andreas Gursky and Alexis Rockman. Utilizing a broad range of scale and media, the installations are often unsettling in their ability to portray human anxieties around the future.

"Future Shock" is titled after Alvin Toffler’s 1970s book of the same name, which describes the effects of rapidly accelerating technological and social changes on humans. Several of the works explore technology’s replacement of physical human interaction. Rafael Lozano-Hemmer and Krzysztof Wodiczko’s “Zoom Pavillion,” is an installation which uses security cameras to project images of the viewers onto the walls of the space in real time, mapping the physical proximity to other viewers and creating a digital catalogue of all those who have attended. The installation is effectively unsettling, leaving us feeling violated or targeted by the surveillance. Lynn Hershman Leeson’s “Infinity Engine,” also a large-scale installation, replicates a genetics lab and incorporates artificial intelligence and digital surveillance. This installation evokes a feeling of unease by exploring the ways individuals are left to the devices of genetic modification and the inevitable advancement of technological over human intelligence.

Many of the installations are defined by a post-apocalyptic lack of human forms. “Migration,” a stunning short film by Doug Aitken, explores what happens when animals are free to roam human-made spaces. Beautifully shot and displayed on a billboard-sized screen, the film roams empty motel rooms and abandoned neighborhoods with wild animals left to their own devices. Seeing them attack pillow cases and frolic in filled bathtubs is downright comical. Paintings by Alexis Rockman similarly portray human environments overrun with wildlife, but in a more sinister way. “Battle Royal” and “Bronx Zoo” are both large-scale tableaus in which different forms of wildlife appear pitted against each other, sometimes to the death.

While the narrative element of "Future Shock" is strong throughout, a few seem a bit out of place. Andreas Gurskey’s “Kuwait Stock Exchange” and “Chicago Mercantile Exchange” are both beautiful, large photographs which find a rhythm and symmetry in chaotic circumstances. Gurskey’s photographs certainly convey the mind-numbing and dehumanizing effects of capitalism, yet this sentiment, though perhaps the most literal interpretation of Toffler’s description of “information overload,” doesn’t necessarily fit in with the  rest of the installations. Neither does Andrea Zittel’s “Linear Sequence,” which proposes a lifestyle eschewing technological overload in favor of embracing simplicity in design. Her furniture and clothing designs are pleasantly organic and analog, but they disrupt the tense feeling of paranoia experienced throughout the rest of the exhibition.

The “future” in "Future Shock" can seem pretty dark, but that is not to say that there isn’t beauty, and even humor (as in Aitken’s case) throughout the exhibition. Tom Sachs’ “Space Program” is comprised of large sculptures that recall both space exploration equipment, and your father’s tool shed. Walking through “Space Program” is like stumbling upon an abandoned space station that used to be inhabited by a rogue scientist with an ironic sense of humor.

Dario Robleto’s “Setlists for a Setting Sun,” in an easily missed side room off one of the larger galleries, is a celebration of the earliest known recording of live music in 1888. A terrarium at the center of the room houses seashells and butterflies, with quotes about the recording and images from the time period. Lining the walls are brightly colored photographs of what first appear to be other worldly orbs. The wall text informs us that they are in fact photographs of stage lights from album covers of live performances by Johnny Cash, Marvin Gaye, Lightnin’ Hopkins, and Sun Ra. Once again, it isn’t the human presence that leaves the strongest impression. Throughout "Future Shock," it is the imprint humans will inevitably leave behind that most strongly resonates.