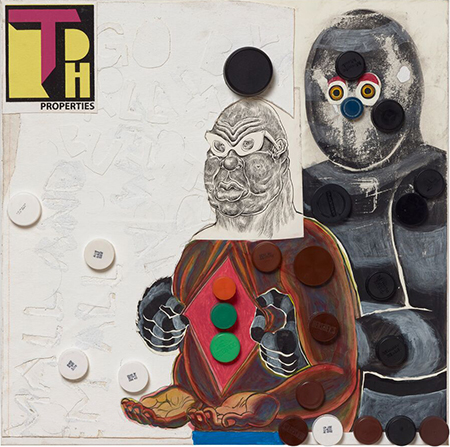 As Art League Houston’s 2017 Artist of the Year, Trenton Doyle Hancock is being honored with an exhibition of paintings, sculptures, drawings and prints dating back 20 years. The location of the show was moved to the former Rice University Art Gallery while Art League Houston repairs damage from Hurricane Harvey. Hancock is well known and widely admired for the imaginative worlds and fantastic characters he has been developing since childhood. His highly personal mythology encompasses art and art history, superheroes, pop culture, graphic novels, horror movies, science fiction and Bible stories. Hancock’s major theme is man’s battle against evil, which exists both within him and all around him. The show includes intricately detailed drawings and prints, colorful patterned paintings, sketchbooks, helmet-like sculptures, and text painted on the walls. But Hancock is first and foremost a draftsman, and drawing is the foundation for all his work.

Hancock’s work is dominated by the “Mounds,” progressive and civilized creatures who are attacked and tortured by “Vegans” who live under the earth and represent oppression. His characters include superhero Torpedo Boy, an alter ego who tries to protect the Mounds, and Junior Mound, Bringback, Baby Curt, and Shy Jerry. “Bringback Figure Mask, Textiles” is a black and white fur-covered head of a humanoid who abducts people and brings them to Junior Mound for consumption. In “Miracle Machine #1, or Vegan Made Moundmeat Fountain,” the Vegans are triumphing over the Mounds, as a fountain of blood is surrounded by the terrifying creatures.

As a student at Texas A&M University at Commerce in the mid-1990s, Hancock worked as a cartoonist for the school newspaper and was influenced by graphic artists, illustrators and cartoonists at the school, including Lee Baxter Davis, Gary Panter and Jack Unruh. Following an increased interest in painting, Hancock attended Temple University in Philadelphia for his MFA and was included in the 2000 Whitney Biennial. His 2014 drawing retrospective at the Contemporary Arts Museum Houston featured 200 drawings, covering the walls from floor to ceiling. This mini-retrospective is also displayed salon-style, and the cumulative detail is astounding. Social commentary, good versus evil, humor — it’s all there and then some.