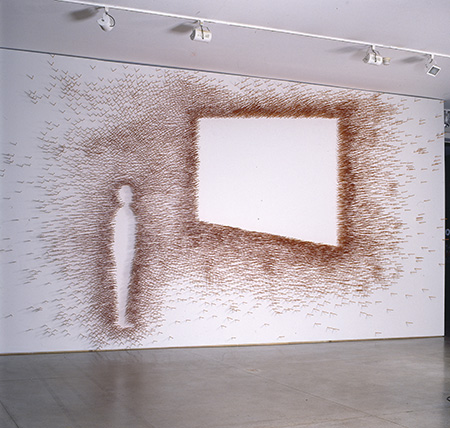 The vibrancy of Brazilian contemporary art is on full display in “Past/Future/Present,” the first large-scale U.S. appearance of works from the Museum of Modern Art, São Paulo (MAM-SP). Drawing from the 1990s and early 2000s, the multifaceted exhibition spotlights 59 artists, including standouts such as Vik Muniz, Ernesto Neto, Valeska Soares and Jac Leirner. We might ask, why bring Brazilian art to the desert Southwest? The answer partially lies in the five themes that the exhibition explores, all of which demand reflection because of their universality. What the artists have to say about self-identity, for instance, has the potential to register with anyone viewing work from Brazil for the first time.

Certain to captivate viewers are the installations, starting with the wall-length “Nota sobre uma cena acesa ou os dez mil lápiz (Note on a Lit Scene or the Ten Thousand Pencils)” (2000), by José Damasceno, which straddles the exhibition’s “Shifting Identities” and “The Body/Social Body” themes. Pencils stuck in the wall use negative space to roughly outline a person gazing at an artwork — jarring the viewer into self-recognition.

Nearby is “Transeunte (Passerby),” (2001) by Pazé, in which a life-size, fashionably dressed puppet appears to defy gravity by “walking” along the ceiling. Ironically, Pazé is confined to a wheelchair. Commanding attention on the opposite side of the gallery, as part of the “Landscape, Reimagined” theme, is Cássio Vasconcellos’ “Uma vista (A View)” (2002), a photographic installation in which 70 fragments of a cityscape have been positioned in five rows, about five feet apart. As viewers stand in a certain spot and look through a simple lens, the fragments coalesce into a unified composition. The artist plays with perspective, simultaneously delivering a subtle message about trading divisiveness for unity.

Smaller-scale works dazzle as well in the “Impossible Objects” and “Reinvention of the Monochrome” sections. A compelling work in the latter area is Rosângela Rennó’s “Sem título (Untitled, from the series ‘Red’)” (1996), in which archival family photographs become ghostlike under a vivid red field. “Impossible Objects” features readymades and paintings that re-interpret masters such as Marcel Duchamp and M.C. Escher, sometimes in a mocking way.

One of the best works of any category is Keila Alaver’s photographic collage “Sem título (Untitled)” (2000), a commentary on otherness and the violence that often accompanies it. Two shirtless boys of different races embrace, but their faces and intestines have been excised and replaced by leather bladders. Brotherhood becomes a moot point. Among the handful of video works is Cinthia Marcelle’s eight-minute video “Unus Mundus — Confronto (One World — Confrontation)” (2005), which captures Brazilian street performers as they juggle blazing torches and march in formation through a busy intersection, irritating motorists. It’s a lens into Brazil’s social strata.

The title of the show is meant to reflect how these artists honor Brazil’s history and diverse cultures while looking toward a globalized future. As the museum points out, the goal is not to be a treatise on the country’s artistic output in this particular timeframe, but to provide a rich sampling — with cross-cultural themes that often overlap from one piece to another. And soon enough, for viewers of any nationality, a greater understanding of Brazil’s rightful place in the international art scene emerges.