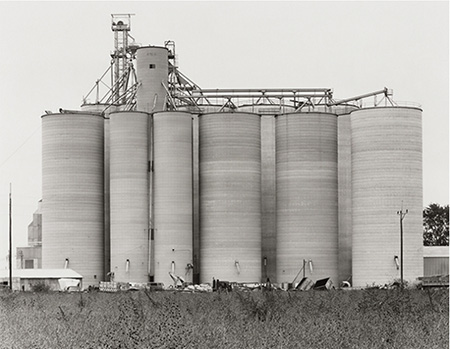 A new exhibition of photographs by Bernd and Hilla Becher affirms the staying power of works by the late husband-and-wife artist team who are today revered as much for their influence on their students — among them Andreas Gursky, Candida Höfer, Thomas Ruff and Thomas Struth — as they are for their own photographic oeuvre. Pioneers in the German school of objective photography, the Bechers were inspired by their fellow countryman August Sander, who attempted to document every type of human physiognomy. The subjects that caught the Bechers' eyes were industrial facades and structures such as water towers, grain elevators and blast furnaces.

Although, as dedicated archivists, the duo traveled the world to find their subjects and categorized their images under the heading of 'typologies,' their true impetus was aesthetic. Considering each structure to be an under-appreciated sculpture, the Bechers sought to emphasize form and volume, with every subject centrally positioned and viewed frontally so that a one-on-one relationship is established with the viewer. To ensure proper conditions and to avoid distractions, the Bechers only photographed under cloudless skies, and excluded any human presence from their photos. Whereas conceptual art can run the risk of failing to engage us when an artist places the primacy of the concept above that of form, the Bechers consistently succeeded because they did just the opposite. Intrinsic beauty is especially evident in the sinuous curves of cylindrical structures in this exhibition's selections from the "Grain Elevator" series, while constructed formal interplay is seen in the characteristic modular groupings of photographs that invite the eye to move through each overall composition in a variety of rhythmic sequences.