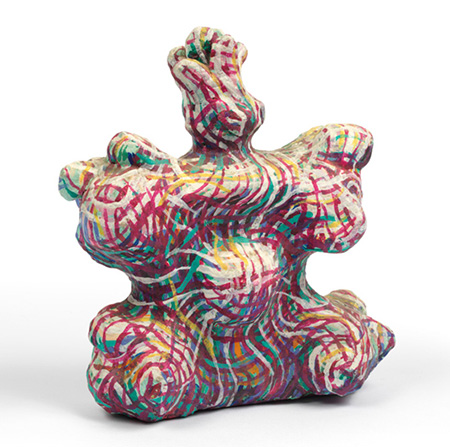 On two long, white tables, 55 small sculptures by as many artists populate the length of the gallery. The array of artworks resemble specimens laid out for inspection, running the gamut of familiar to strange in their forms. All kinds of practices are represented: the finely crafted, and the more spontaneous and haphazard; the objects made by those versed in sculpture and by those who’ve arrived there by other means; traditional media and found objects. They’re all democratized here by their scale (mostly under 20 inches high), all on the same plane.

By and large, the works here are of two eras: those created in the 1960s and 1970s, and those created in the last decade. This generational dichotomy is not a surprise, given the makeup of the gallery’s roster. But in this exhibition it also serves the purpose of highlighting the similarities of past and present, established and emerging. The shining steel ball trapped among the brass bars of a wooden box in Rodney Quiriconi’s untitled 1964 work echoes in Alex Chitty’s “Whores, Pimps, Saints and Holymen” (2017), with its white bronze, acorn-like nodules mounted on rods to appear as though they’re “peering” through small holes drilled in the chunk of pine between them. Both Quiriconi and Chitty succeed in imbuing these stark, minimalist pieces of wood and metal with animate characteristics.

If Chitty and Quiriconi provide examples of skilled craftsmanship, Philip Hanson and Alex Bradley Cohen are representative of another subset of object-makers: three-dimensional pieces made by painters. Along with artists like Ellen Lanyon, Joyce Pensato, Margot Bergman and John Sparagana, Hanson and Cohen have objects in this show with lineages that trace back to the precedents of their two-dimensional practices. Like his paintings, Hanson’s acrylic on paper mache “Perfect Moment Quintessence” (1973-1974) features densely patterned linework. The depth and undulating volume that he achieves with painterly illusion in his 2-dimensional works here appears in actual space. The same human emotion that permeates Cohen’s figurative paintings can be seen in his 2014 untitled handbuilt ceramic object, the glaze dripping down into this this vaguely humanoid form’s two gaping mouths.

The traditional craftsmanship and the painterly making are just two of a variety of stylistic approaches in this exhibition, the scope of which go beyond the length of this article. But the scale that they all share contributes a great deal to their collective aura. When sculpture is monumental, we are awed. When it’s lifesize, we interpret it in relation to our own bodies. When sculptures are small as they are here, they feel representative of something else, like symbols or microcosms for us to look at closely, and consider in their entirety.