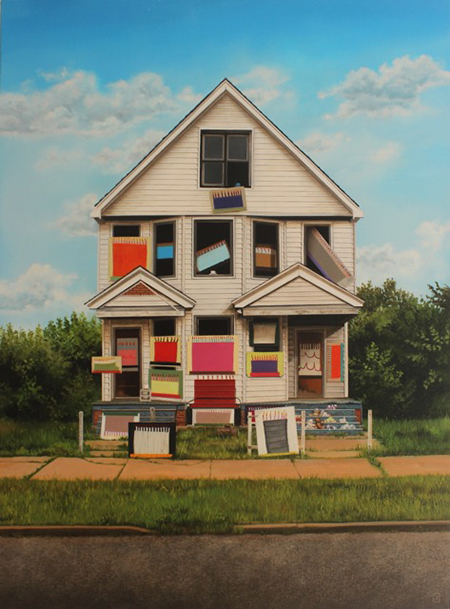 San Francisco painter Jessica Hess mixes a realist vision, photorealist technique, a bent for conceptualism and even social comment. Her fifteen new hyperrealist works depict slices of architectural life of urban America, from New England to Alameda, and from Portland to Detroit. Her decidedly unglamorous views of dilapidated or graffiti-enhanced buildings attain a kind of poeticization of the everyday and banal — what most of us walk right past and overlook — but without politics or pathos. Most exude a wry humor and delight in the idiosyncratic, attitudes that one associates more with Pop art than with visually punctilious photorealism, which tends to glorify and memorialize its subjects. Hess’s use of photographs is actually closer to David Hockney’s multiple-perspective Polaroids than to the measured classicism of, say, Robert Bechtle’s views of suburban California.

Hess shoots up to a hundred photos of each site and constructs a collage from the 4x6 prints, altering color and even weather and time of day to suit the direction that evolves during the painting process. If her previous show, "More is More" (2015), focused on capturing the abstractions that graffiti glut could create on abandoned buildings’ walls; "Less is More" (with its implicit reference to the functional Bauhaus architecture, sans ornament, of Mies van der Rohe) examines the mostly unadorned structure — except for the “buff” coloring. Suggestive of the efforts by building managers to cover up graffiti with irregular rectangles of tan and gray paint, this image quotes Hans Hofmann’s style of abstraction, but with the saturation levels nearly zeroed out. Says Hess, “I love weathered surfaces, faded colors, decay. The older I get, the more I appreciate subtlety.”