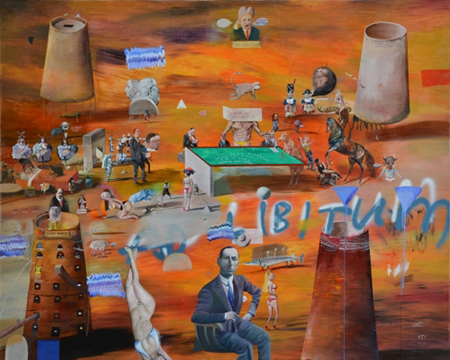 The impact of the third Seattle Art Fair presented by AIG extended far beyond the three early August days at CenturyLink Field Event Center. Coinciding with an unprecedented heat wave, attention soared with a seemingly vast demographic and geographical spread of artists, art galleries, visitors and cities of origin. Attending each day as well as the Thursday, August 3 evening preview, I was determined to avoid burn-out and limited my visits to 1-2 hours per day. As a result, I had a chance to mentally concoct my own critical "ranking," "top ten," and "new talent spotting" lists. Rather than engage in such tropes, here six artists (including one team) whose work caught my attention and proved heartening for someone who believes painting is in the midst of yet another revival after surviving repeated assassination attempts ever since the rise of conceptualism. Conceptual and installation art are now assimilated into various pre-existing genres like painting and sculpture, no longer viable as stand-alone studio practices.

How can six artists represent Macau, Russia, Mexico, Canada, the Philippines, Hong Kong AND Brooklyn? Because those are the delightfully hybrid backgrounds of ethnicity and art training that my so-called Kangas Six reflect. Konstantin Bessmertny, Sarah Cain, Laurent Craste, Einar and Jamex de la Torre and Iara Celeste Diaz share approaches to painting and sculpture that merge everything. Together they provided my happiest memory bank of the Art Fair, lingering in my mind's eye long after the four corner restaurants had closed, the refuse left over from the performance-art events had been cleared, and the gallerists had retired to their respective haunts.

Bessmertny traveled from Russia to Macau for an opening of an international group show, loved the Portuguese Colonial-Imperial Chinese architecture mix and stayed on. Wildly popular among Chinese art collectors, his paintings in Seattle were displayed by a Hong Kong gallery, Rossi & Rossi. Centerpiece of the booth was "Ad Libitum" (2016) a 5 by 7 foot oil that weirdly combines Hieronymus Bosch and Komar & Melamid (for whom he once worked as a studio assistant). Nuclear cooling towers are placed casually near circus troupes, bathing beauties, a distant tiny effigy of Karl Marx, and a formal seated portrait of Futurist giant Umberto Boccioni placed front and center at its base. A world this spontaneous and disorganized could be post-Soviet Union or yesterday's 19th-century Tsarist wonderland. A big mock-spray-painted phrase, "Ad Libitum," (translated as "at will" or "as you will freely") is smeared across the front, over a bustling eruption of people, animals, and bizarre equestrian portraits. Either a cruel parody of Socialist Realism or, worse, a put-down of reductive Surrealism, this picture will not go away.

Light years away in sources and ambitions, "waves" (2016) by Sarah Cain, in the Galerie Le Long booth, is an artist I have been watching for a number of years with great interest. This work has an internal irony, re-inventing Clement Greenberg's shallow "picture plane," but its overlaying grid is an obvious retort to the messy, zigzagging brushwork underneath it. To add marvelous insult to injury, Cain is now applying cheap-o Mardi Gras strands of necklaces between the "cell bars" of the grid, pushing the decorative nature of abstraction into our faces and heads. I can't get hers out of mine.

Québec-based ceramist Laurent Craste at Back Gallery Project of Vancouver, BC sent seven new altered, or battered porcelain sculptures, all based on selected factory molds of traditional serving pieces. My favorite, "Trophy VI" (2017) stabs an axe into the side of a wall-mounted lidded vase à la Sèvres. "Death by Paris flea market" could be a subtitle. Carefully applied blue-and-white decoration is desecrated. "Killing" French porcelain with all its violent, Revolutionary-era associations, has never been funnier.

In what one hopes will set a precedent for Art Fair, Traver and Prographica/KDR shared a booth to host an extraordinary installation and display by Einar and Jamex de la Torre. Their "Midday Devil" (2016), 10 by 10 square feet of lenticular lenses, blown glass add-ons, painted areas, all surrounded by suspended butterflies, dancing scorpions, and defiant brown-skinned men with antler heads stood out. "Midday Devil" is the usual overkill for the brothers, but it is overkill that cannot be faulted as we take in the crowded, symbol-crazy composition replete with orgiastic scenes of the Last Judgment (hello, Tintoretto) and sinking pirate ships.

Iara Celeste Diaz is just as insanely image-jamming as the de la Torre brothers. Coming from Manila, she manages the hyper-religious devotional kitsch genre with equal aplomb and humor. Amy Li Projects of New York brought several works, one of which, "Sophia, West of Eden" (2012), focuses on another night-time scene, some small village with crescent moon above a sprawling townscape below. Painted as if it were a tapestry, this work, like Bessmertny's and the de la Torre's, devises ways of globalizing the local, generalizing the picturesque, turning it into something ominous, portentous and unforgettable.