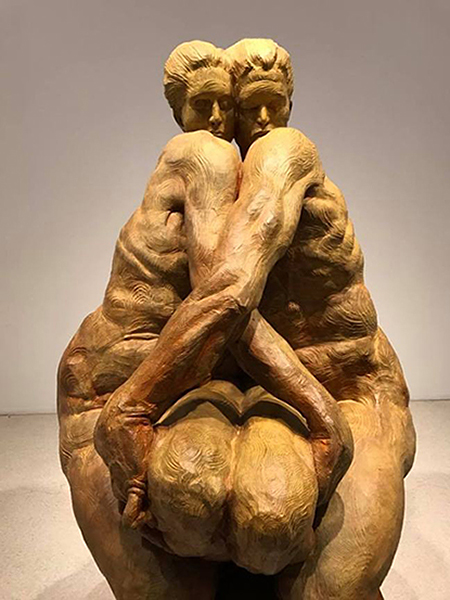 “When Line Becomes Form” is a powerful cross-section of expressionistic works in figurative and abstract styles. Some works are figurative, others abstract. The six artists — Mark Acetelli, Dirk Hagner, Cindy Jackson, Grey James, Joanna Kidd and Miles Lewis — work in a wide range of mediums. Acetelli creates layered canvases of oil and encaustics, offering ghostly, dreamy images that are both lush and ephemeral. Hagner produces large woodblock portraiture of literary and political subjects in a cool and elegiac style.

The late Cindy Jackson’s beautiful, large scale sculptures have the look of soaring angels and the feel of touching humanity. These are major works, masterful, traditional sculptures with a gracefully modern spin. The paintings and mixed media works of James focus on transgender icons, shaping a highly personal account of transition that is both physically palpable and spiritually uplifting. Kidd’s work is also about transition, but in a formal sense: that between sculpture and painting. Her bas relief portraits are detailed and dimensional, fascinatingly alive. Life-drawing artist Lewis offers intimately textured work on paper that has the appearance of dimensionality. Taken together, this group not only depicts the human form but illuminates the human spirit and its diversity.