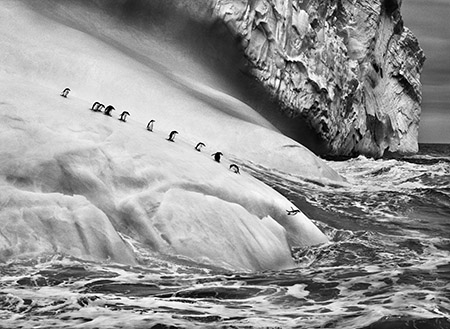 Brazilian photographer Sabastiao Salgado’s work sits in a space between art, documentary and photo-journalism.  His first career and study for a PhD in Economics was followed by the light evoked from childhood memories of riding horses across land on his parent’s farm in the rainforests of Brazil. It is there that the impetus for his photography practice was generated. His 200 plus collection of black and white medium to large format photographs exhibited at the Museum of Photographic Arts focuses on nature and the environment . His images were shot over several years and on many locations around the globe.  From the Brazilian rainforests to the Siberian artic north, Salgado tracks nomadic tribes, sea and land animals as they live and migrate, to sea and landscapes in their pristine beauty. His aim for Genesis was to investigate air, water and fire – the elements of earth’s beginnings and to bring to our awareness it’s stark and unblemished mark on our humanity.

Sometimes shot from hot air balloons so as to not disturb wildlife, Salgado captured hundreds of penguins and reindeer as they migrated, communities of seals quietly lying on rocks, whales poking out of the sea, endangered families of birds flying overhead, and gorillas, elephants and hippos as they performed their daily routines. Salgado travelled to over 100 countries to photograph raw, real events.  In doing so, the artist created images that are poetic and beautiful leaving the viewer to feel as if we are in on a secret, capturing people, places and animals in private and revealing moments in time. In the northern arctic regions of Russia, we catch a glimpse of the nomadic Nenets tribe as they appear frozen in snow in their hand-hewn fur jackets and hats travelling across ice with reindeer to the Zo’e tribe in the Brazilian rainforest.  Salgado’s images are a direct documentation of indigenous communities that remain untouched, and serve as examples of our earliest forms of human settlements. His classic and realistic photographs run the gamut from big views of landscapes and seascapes to more close-up images of  animals and people.  The result is a rediscovery of our planet and the awareness of its’ preciousness — and the responsibility that we as humans have as guardians of our earth.