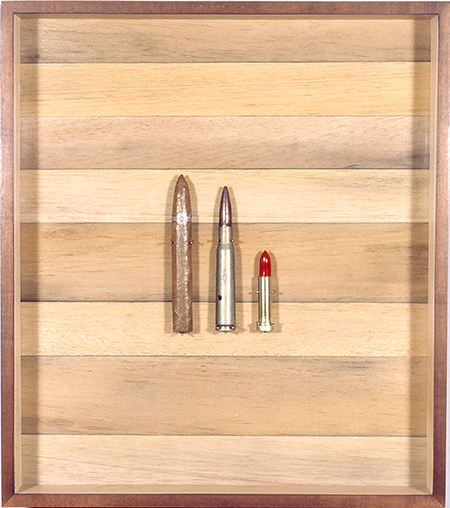 An iconic TV sculpture by Nam June Paik is the centerpiece of a loosely themed, mostly lighthearted group show called “I’m Sorry But It’s Hard to Imagine,” where viewers are encouraged to embrace the experimental and unexpected. The Paik work, “Electro-Symbio Phonics for Phoenix” (1992), incorporates 63 televisions linked together by neon to form three robot figures. By virtue of four video channels and the constant flashing of various symbols, the sculpture is entertainingly mesmerizing. In addition, it’s a fine example of the experimental and multi-discipline Fluxus “anti-art” movement of the 1960s and ‘70s, during which time Paik first introduced the idea of video installations.

The spirit of Fluxus informs “Cheese Grid” by The Art Guys — a massing of actual cheese squares laid matrix-like on the floor, prompting the question, “Is this art?”, while drawing a chuckle. More thought-provoking is “Nine Fragments From the Delta of Venus” (2004), a mixed-media work by Judy Chicago that typifies the artist’s quest to disrupt patriarchal ideas about sex. The politics-laden work of Dominique Blain is also represented with “Untitled” (1993), a deceptively simple arrangement of a cigar, bullet and lipstick on wood. Altogether, the eclectic set of works demonstrate the mutable definitions of art and the endless potential for connecting one work to another.