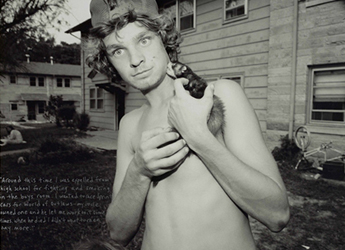 In “Pigeon Hill: Then and Now,” Indiana-based photographer Jeffrey Wolin presents a body of work composed of two parts. Between 1987-1991, Wolin photographed residents of the notorious Pigeon Hill section of housing projects in Bloomington, Indiana, and then returned to photograph the same subjects again in 2011-2015. In these black-and-white portraits residents pose in their homes or yards. Scrawled in the backgrounds around the figures are Wolin’s handwritten transcriptions of the subjects’ own narratives. His "Pigeon Hill" series is a candid but compassionate study of white, working-class Americans whose stories are alternately hopeful and tragic.

In the portraits of "Timothy Babbs, Pigeon Hill," a tough teen cuddling a pet ferret becomes a prisoner with repeat offenses for not paying child support. In Darlene’s family portraits, the subject poses with a man she tried to kill for abusing her daughters in 1989, while in the 2012, she reports a contented life with a mild mannered partner and a baby grandson to care for. The snapshots of then and now put names and faces to a subsection of Americans that are often generalized and misrepresented. Arguably the strongest characteristic of Wolin’s series is what he doesn’t depict. We must put ourselves in the subjects’ shoes to imagine the lives lived in the decades between Wolin’s chapters.