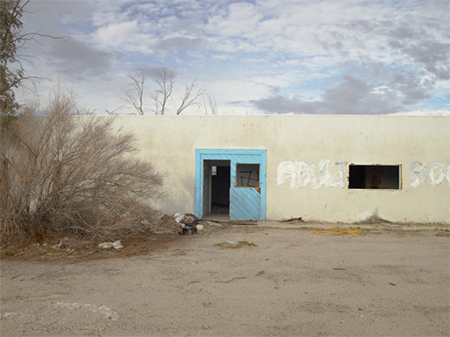 Richard Misrach has been documenting the environmental damage of America’s capitalist culture for decades — “… these cultural manifestations in the natural landscape, ... the collision between nature and civilization.” He may not be assuming the role of prophetic doomsayer per se, but the signs of incipient collapse are there for anyone to see and decipher. The government's environmental damage report, asserting that climate change is only accelerating, was recently leaked in order to evade death by redaction; and, of course the ongoing comic tragedy and tragic comedy in Washington. Misrach began working on this series of ruined houses in the American Southwest bedecked with anonymous graffiti during the 2016 election year, and found in the swastikas and racist comments a compelling record of “the dystopian side of the American dream.” This is now familiar to everyone: desperation, despair and vicious scapegoating. Observes Misrach, “These are the hieroglyphics of our time.”

Five large photos depict abandoned houses seemingly invaded by malefic spirits. "Swastika, Barstow, California" presents three layers, or registers: the dry gray-brown dirt; the blue sky dotted with clouds; and, separating them, a beige wall of a building, with a sky-blue door decorated with a hand sprayed swastika. A similar tripartite composition structures “Trump Loves American People,” North of Reno, Nevada, with a crudely lettered. misspelled sign the only evidence of human presence. "Shotgun practice, 'he will return,' Nevada" shows a trio of cinder-clock walls crowned by rebar stems. A crucified Jesus serves as the target, all but obliterated by bullet craters, only his limbs still recognizable.

Also included are smaller-format graffiti shots taken with an iPhone, and grouped in clusters, from the Obama years: ‘premonitions’ (to use Misrach’s term) of the current culture war. "Tagged Boulders, Lucerne Valley, California,” is a thirty-two piece grid of medium-sized photos of rocks upon which messages have been written: $, thug life, We color the world!