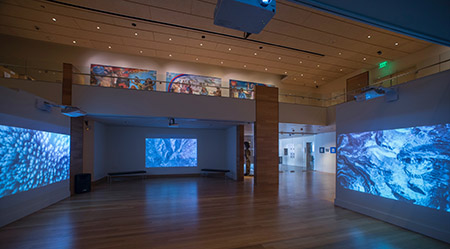 From 2007 to 2010, Steven Yazzie (Navajo/Laguna/European) was a founding member of the artists' collaborative Postcommodity. For the last several years, the Phoenix-based Yazzie has been working independently on multimedia projects addressing indigenous culture. Here, he debuts the four-channel video installation “Black White Blue Yellow” — shorthand for the four sacred mountains in four directions that surround the Diné (Navajo) people in northeastern Arizona. For instance, to the east is the white peak, Sisnaajini, also known as Blanca Peak. The installation’s four screens surround us with quickly shifting landscape images that convey grandeur and mystery. Yazzie traveled to remote areas to capture panoramas, close-ups and aerial shots, as well as to record field sounds. The exhibition reprises those travels with “The Nomad,” a small camping tent, along with rounded “sitting stones” bathed in yellow light and representing locations for contemplation.

But the work wouldn’t feel as immersive and ethereal without the interspersing of manipulated and semi-abstract images, along with isolated shots of drifting clouds and night skies. Add to this a soft, atmospheric soundtrack and the sense of spiritual connection is satisfyingly heightened. In the gallery overlooking the installation is Yazzie’s 160-foot-wide, 13-section mural “Fear of a Red Planet: Relocation and Removal” (2000). While touching on Native cultural traditions as well as colonization, discrimination and raiding of natural resources, the mural diverges from the mood of the videos. Yet both serve as odes to the Southwest’s indigenous roots.