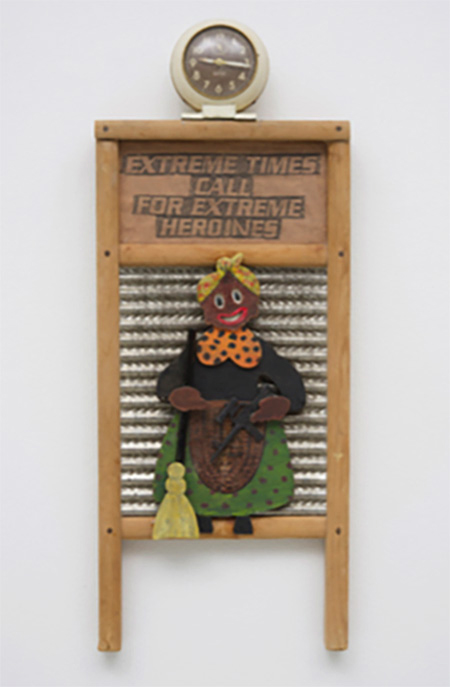 Betye Saar's current exhibition, “Keepin' it Clean,” is as intriguing as the artist herself, a charismatic 91-year old woman of multiple backgrounds — African American, American Indian, and Irish. Its centerpiece is 24 washboard assemblage sculptures. Apart from the politically and socially relevant theme, the show works aesthetically. Saar often works with colorfully painted wood, sometimes mixed with metal. Her reds range from maroon to burgundy, which elegantly blends in with the gray walls of the museum space. However, the further you immerse yourself into her subject matter, the more you feel the historical pain that informs the work.

“A Loss of Innocence" (1998), a mixed media tableau, presents a beautiful beige vintage dress on a hanger floating so as to cast shadows on the wall. Looking closer, we see various labels stitched onto the dress. Some read “tar baby”, suggesting the verbal and sexual abuse of African American slave women at the hands of their masters. “Liberation” (2011) and “Extreme Times Call For Extreme Heroines”(2017) evolved from a much earlier work, “The Liberation of Aunt Jemima” (1972), portraying a beweaponed female African American servant in the process of liberating herself. These works strike a contrast to “Dark Times” (2015), in which Saar portrays a rather discouraged looking black man positioned in a corner, referencing the recent police killings of unarmed black men that sparked the Black Lives Matter movement. The exhibit succeeds aesthetically and rhetorically as a call for equality and social justice.