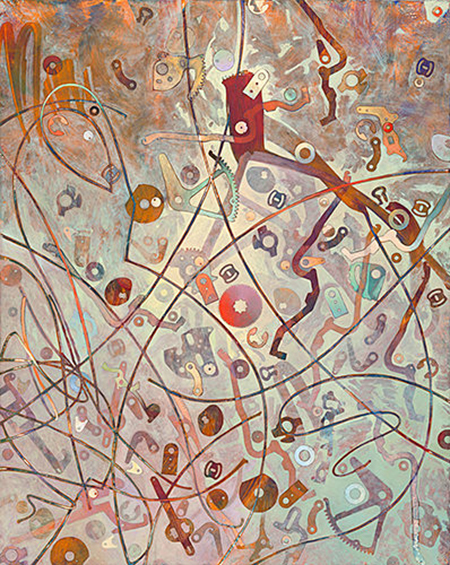 Sono Osato’s nine new works in “Submergence" reveal the Brooklyn artist emerging (so to speak) from the heavily impastoed works she had been creating in recent years. Objects previously floated in heavy monochrome matrices of oil paint. These pieces employ, instead, flat panels and thinner paint, used illusionistically to create layers of transparent space. Osato’s concern with objects suspended in matter and time continues, but the objects themselves are mostly absent, replaced by colored silhouettes. The opaque monochrome grounds of yore give way here to flatness and color — and Osato turns out to be a talented colorist, creating wonderful harmonies within the predominantly tan, blue or gray surfaces of tinted rabbit-skin glue and oil paint.

Six of the modestly sized works on wooden panel are in a vertical rectangular format. Three small triptychs are composed of squares, with the image bleeding across the breaks. Titles like “Tawfono," “Gubo," "Arvand-Rud" and “Tamusuta” are place names from ancient Aramaic, reflecting the artist’s interest in history, time, and the persistence of objects as reservoirs of cultural memory. Her use of machine parts scavenged from old typewriters and adding machines, analog technology based on and shaped by mechanical principles, reiterates Osato’s interest in the “beautiful engineering” of artifacts not originally considered artful — of tools and parts of tools — that, in our age of digital magic, are becoming as mysterious as ancient hieroglyphs.