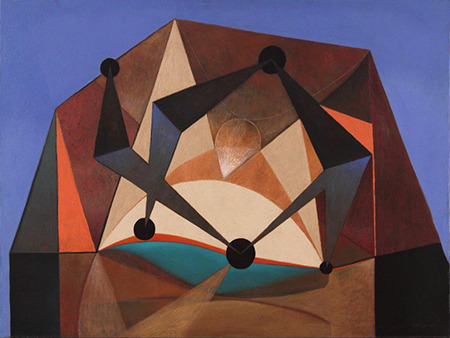 Geometric black figures comprised of wide to narrow triangles accompanied by round circles are placed amidst earth colored triangles that, seen as a whole, might represent an otherworldly stage. Touches of orange suggest light and the luminous blue background the twilight between reality and imagination.

Cuban painter Rafael Soriano (1920-2015) titled this painting “Danzarines (Dancers),” perhaps to pay homage to his native culture where dance and music, all of the arts, reign supreme. While the bright center suggests joy, the work more slowly reveals a melancholy. Soriano made the painting in 1969, seven years after he fled Cuba for the United States. One might surmise that the dancers, given the painting’s date, speak of the physical and emotional effort it takes to regain one’s sense of place and permanence after displacement by, in his case, self exile.

The painting is also stylistically important, since it is a key marker of the gradual transition from the stark geometric shapes, ultra-bright colors and rough but subtle textures of his early work to the softer, more organic forms to come. The triangles at the center are beginning to slowly melt into curves.

The later surreal paintings are distinguished by soft but highly luminous colors, biomorphic shapes and flowing planes. These prove the most fascinating, evidence of his intellectual and spiritual transition into a new universe independent of past or present. "La Noche (The Night)” (1970) with its darkly mysterious shapes assembled into a dream replication of structures and streets set against a luminous moonlit sky exemplifies Soriano’s resurgence of creative and spiritual energy.

Curator Elizabeth Thompson Goizueta divides the exhibition into three sections. The first features Soriano’s work from the 1940s and 1950s in Matanzas, where he helped found the School of Fine Arts of Matanzas and remained as its director and a teacher until 1962. During that time he painted in what is known as Cuban geometric abstraction, characterized by strong, sun-drenched colors in geometric planes as exemplified by the 1955 work, “Formas en la luz (Forms in the Light).”

The second phase sheds light on the period between 1960 and 1970, mostly spent in Miami, where early depression of exile manifested itself in a two-year dry period. But, once he resumed painting in 1964, a period of creative resurgence led him to experiment and transition stylistically.

The third section features work guided by intuition rather than norms already established in his earlier work. His became a meditative vision of a wider universe. “La soledad (Solitude)” (1975) is filled with muted shapes of clouds resembling a female body floating through space. This female form is pure fantasy and feels like a source of comfort, a painterly rendition of the German poet Goethe’s pronouncement about the power of the female essence.

Art historians have placed Soriano in the context of Western painters such as Titian, Velasquez and Rembrandt and to a lesser degree to Corot and Braque. Among Latin American painters, critics have compared his work to Rufino Tamayo’s of the late 1940s to the 1960s, as well as to Fernando de Szyszlo and Armando Morales. Soriano’s special talent was his ability to engage intellect and emotion, transcending his own time, place and culture. Soriano wrote, “The anxieties and sadness of exile brought in me an awakening. I began to search for something else; it was through my painting … And I went from geometric painting to painting that is spiritual. I believe in God, I believe in the spirit.” In a time where immigrants are pilloried by those of narrow horizons, contemplating Soriano’s oeuvre offers a measure of enlightenment and peace.