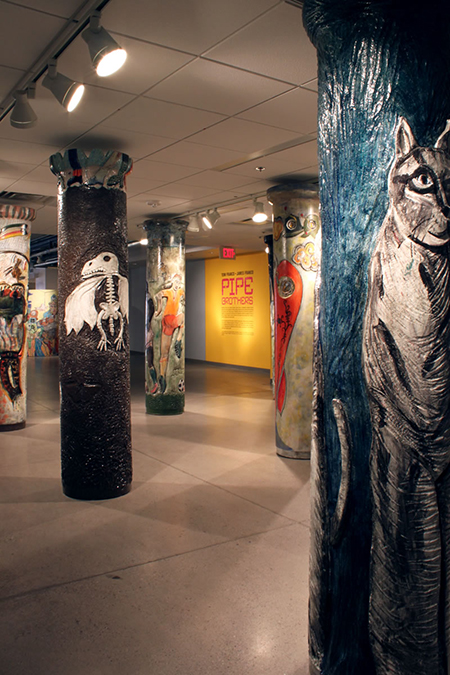 On top of his acting career, James Franco is a painter who has often exhibited alongside his younger brother Tom Franco, an assemblage artist and founder of the Bay Area’s Firehouse Art Collective. Through a friendship with California ceramist John Toki, the brothers were introduced to Mission Clay, a factory which has a reputable history of letting noted ceramists and sculptors experiment with massive vitrified clay pipes — sewer pipes, really. Tom, after a year of visits to their Phoenix-based studios and kilns, has produced an attractive set of nine pillars, all made pictorial through prodigious carving and painting. Two of the pillars are James’ creations, brought to fruition by Tom from detailed drawings. “Jimmy” reproduces a movie scene where James portrays James Dean, driving his famous Porsche.

Tom’s works reflect an artist generally having fun with these eight-foot-high, cylindrical surfaces — he and his team often needed ladders, rakes and pruning saws — to come up with whimsical images described by titles such as “Frog and Bunny Jump Rope” and “Outerspace Ships.” Also noteworthy is the way the Ceramics Research Center has planted the 750-pound pipes in a three-by-three array, evoking a sense of walking through ancient Greek columns. A second section of the exhibit consists of four pillars by other artists. The works by Toki, Don Reitz and David Kuraoka are so elegant it’s hard to believe the transformation. The pillar by Patrick Siler, with its slyly humorous comic book-style drawings covering every inch of surface, turns the clay cylinder into a mural.